Charles is more concerned with conservative reactions to the Paris attacks

As is typical of the Left, instead of being upset at the ISIS terror attacks on Paris, Charles is more concerned about how conservatives are reacting to it. 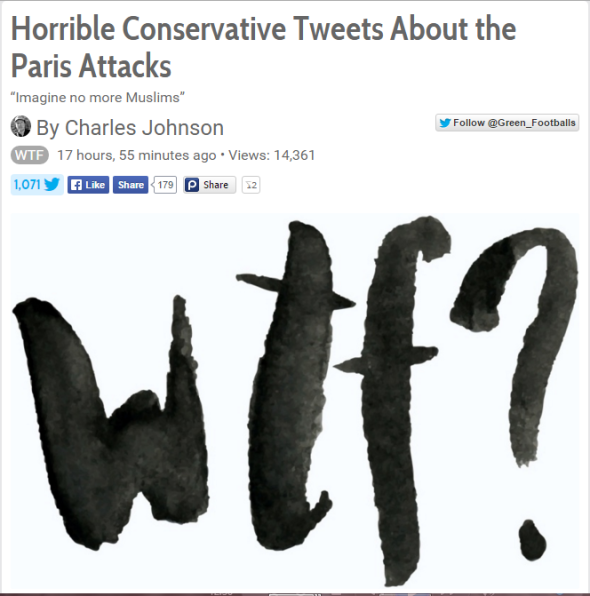 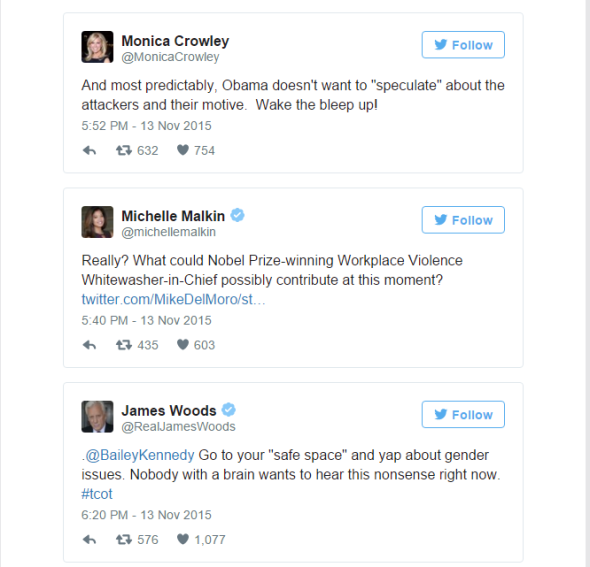 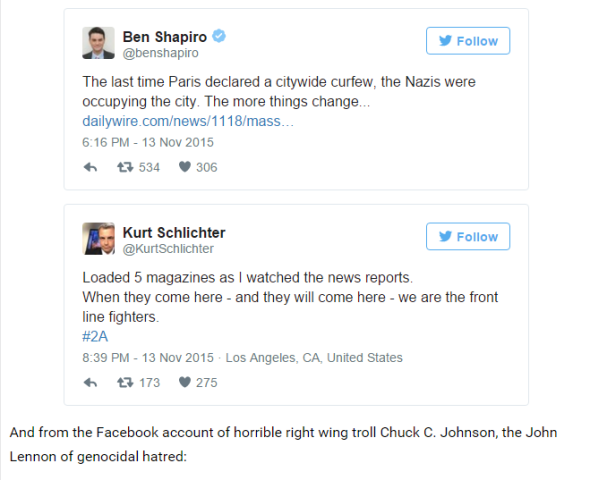 Nice priorities you have there Charles. No matter how much you suck up to Islamists, they will not remove that Fatwa on you.

The Flemish menace unites with the Likud threat!

Charles has been going down the anti-Israel road over the last few years as part of his rite of passage to the Left. Last year during the Israel-Hamas conflict, Charles did his official “breaking with Israel” announcement that many of us have been predicting since 2008. Around that same time, Charles became obsessed with a anti-Islamic Rightwing Flemish party in Belgium. He considered the Vlaams Belang the greatest threat to humanity. His insane obsession with this party turned him into an anti-Flemish bigot.

Newsweek ran an article of how The Israeli Right and European Right now see eye to eye on the Islamic threat. Charles with his sick twisted convoluted mind, now considers Likud as big of a threat as The Vlaams Belang. Even worse, the Newsweek article brought the Fat loser’s paranoia to new heights. He accuses the Likud, which is a Rightwing Jewish party of being allied with “NAZIS!” 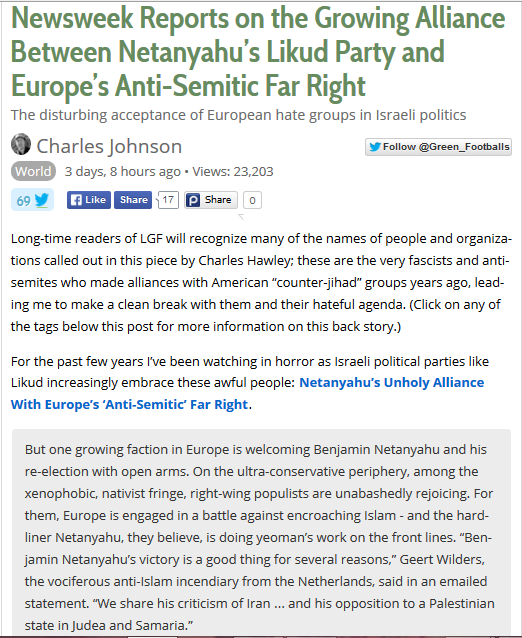 Charles yesterday took another shot at the dreaded Likud!

Likud and Vlaams Belang are now united together! OMG, how will the world survives this Jewish-Nazi alliance ! Will you save us Charles Jonson from the Flemish menace and Likud threat?

Honestly, only Charles can be convinced that Israel would work with “Nazis.” He’s really sick deranged fat welfare sucking loser.

Stuff you don’t put on the Internet

I read this comment by Shiplord Kirel and was stunned he put this out in public.

Personally I think the story is bs. If true, it explains why Shiplord Kirel stays loyal to Charles. Chuck understand what its like to have a wife leave you.

Addendum (ChenZhen): Shiplord is one of the few lizards who expressed his loyalty…live…on the air (go to 2:34):

and as evidence as to how weird this dude really is:

Our old friend the Hispanophobic Sharia supporter, San Francisco Zionist returns! When she’s not dodging Katyusha rockets from Berkley, she is on LGF making idiotic statements. She is now claiming that Japan is on the verge of melting.

Yes Japan is on the verge of melting and will sink to the sea! Wow San Francisco Zionist must have concussions from all those Katyusha rockets. She claims to be a teacher and if true, no wonder our education system is in trouble! One thing for sure, she’s really ignorant.

Update: On this same thread, Charles sees a pattern.

So Charles has uncovered another conspiracy! This man does the best detective work ever een. Clearly he should be an investigative reporter! In reality the pattern he sees is from his paranoia. He will somehow connect his latest theory to the Nazi plot he keeps harping about.

Charles Johnson had the opportunity to be a major player in the political scene. Instead he devolved into some paranoid conspiracy kook obsessed with some imaginary global Nazi plot. One of the key players in his conspiracy is Glenn Beck. Chuck launches smears against Beck on a regular basis. He has accused Beck of being a  Nazi and a key player in the plot which Charles claims is led by Ron Paul. What makes Chuck’s latest attack hysterical is that rather than use his own material, he links to a Media Matters audio clip.

Even If someone doesn’t like Glenn Beck, why bother going to LGF? All one has to do is go directly to Media Matters. Charles is jealous of Beck’s success, so he attacks and smears him. Chuck posts on Beck to validate his massive Nazi conspiracy theory. Once again this post shows, he’s link and not a thinker.

Around late 2007, Charles warned that the Rightwing regional Party in the Flemish part of Belgium was a threat to world peace. The Vlaams Belang, which is led by Filip Dewinter, was supposedly the  tip of the iceberg of some global Neo-Nazi plot. The VB, according to Chuck, was a grave threat that must be confronted. He then went on to claim that Ron Paul was the actual leader of this Neo-Nazi plot that includes a variety of groups and people like the Pope, Pam Geller, The Tea Party, Allen West, Hot Air, Serbs, Orthodox Jews, Marco Rubio and even tobacco companies. Well it turns out that at one time Charles didn’t view Flemish Nationalists as part of a global Nazi plot. In fact, he even was sympathetic to them!

Chuck, you are admitting that you can’t think for yourself and you are so gullible that you were duped by this Neo-Nazi plot? If this is the case, how do you know you are not being manipulated by Iceweasel at the moment? It seems that Chuck thought Flemish Nationalism was good back in 2004, but by 2007 it had eclipsed Islamic Imperialism as the gravest danger in the world. Since 2007 according the Jazz Man, Ron Paul is a bigger danger than Al-Qaeda, Hizballah, The Muslim Brother and Iran combined.

Since Charles clearly is convinced of this Neo-Nazi plot, why doesn’t he contact the FBI and inform them? Come on Chuck, man up and give up your evidence of this evil conspiracy to the authorities.  In 2004 you were part of this plot since you did support Flemish Nationalists.

Charles, save us from the Flemish menace!

There once was a time when Charles Johnson was a hardcore Bush supporter. He used to mock people who blamed Bush for every problem in their life.  Now that he’s a Progressive, he blames Republicans for the damage done from today’s Tsunami. He claims their budget cuts help create the extensive damage.

I really don’t have much to say on this. Charles really is reaching blaming Republicans for the damage of this horrific event. If a meteor hit, The Jazz Man would probably blame the GOP as well.

At least Chuck least is not blaming Nazis for the Tsunami.

Rep. Peter King (R-NY) held hearings on the radicalization of American Muslims. The Charles Johnson of 2005 would have applauded these hearings. Instead, he thinks Nazis should have been the focus as well.

If the Democrats held hearings on Nazis and White Supremacists, would Charles have suggested that Islamic Imperialists also be included? We all know the answer to that is no! In the world of Chuck, The Nazis are every where and perpetrating genocide and terror. To be fair, 70 years ago they were commuting aggression and genocide, but they lost. Today Nazis are a fringe that’s looked down upon in society. But Chuck thinks that the Nazis are on the verge of global domination and are everywhere. Heck Chuck has even accused some Jews of being Nazis. Clearly he is obsessed with Nazis.

Charles, I think you need cut back on playing Call of Duty. You are letting a video or possible WWII movies distort your worldview. This isn’t the 1940’s Charles, it’s 2011. Get with reality, There aren’t Nazis lurking everywhere!

Actually look below Charles, I see a Nazi!

In reality Chuck, you are just a clown.

Gus802 complains that we exposed his opposition to the right of Jews to have a homeland. 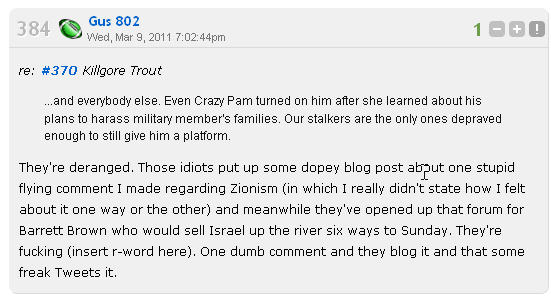 Wow so opposing the right of people to have a homeland is OK with you? What a jerk, realizing he’s digging his hole deeper he decides to drink.

How about you get a job? Oh that’s right, the economy doesn’t have enough jobs to go around! How’s that hope and change working out for you?

Charles then gives Gus some advise.

Charles telling Gus802 to ignore us is laughable. This coming from a man who has outed people’s identities and posted pictures of them. We know you read this blog religiously Chuck. Give it up, your gig is up!

Update: Gus802 chimes in with his Constitutional expertise on Peter King’s hearings!

Gus, I’m shocked that with your great scholarly expertise you are not working at a big law firm!

Another defeat for Chuck

It’s been a bad few months for online cult leader Charles Johnson.  After predicting a massive Republican defeat in last November elections – they actually had a massive win! Barret Brown has humiliated and exposed Chuck as a fraud. His blog has become an irrelevant cult and the laughingstock of the blogosphere. He claimed to have defeated James O’Keefe, even as 2 NPR executives resign.  Now he has suffered an additional humiliation.

Chuck recently made the showdown in Between Gov. Scot Walker and the public sector unions in Wisconsin, his pet cause. He smeared and ruthlessly attacked Governor  Walker thinking he can make a difference.  Well it comes to no surprise to us here that once again, Charles has no influence on events. Gov. Walker passed the collective bargaining reform and Chuck whines in defeat.

Charles, your Dan Rather days are over. You have no influence and have been backing losing causes over the last year.  Chuck, you admitted you were not normal and was going to start playing video games more as part of your new normal life. Just do it and spare yourself the agony of more defeats.

Charles, I’ll be nice and give you a consolation prize. You actually did a post on a real Nazi, who was arrested! 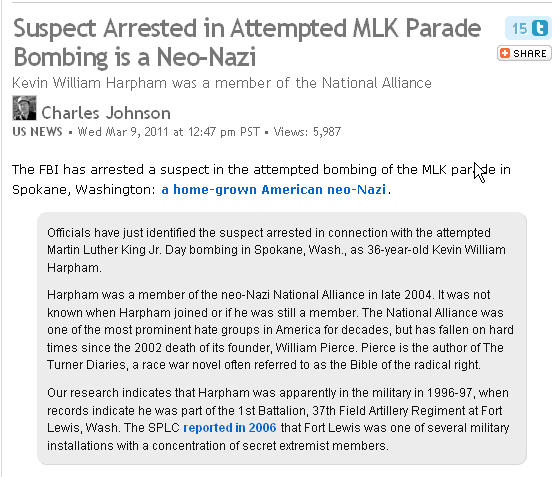 Charles, I’m proud that for once you did  a post on a real Nazi. I doubt this will happen for a while since Nazism is not a big ideology. I know you think Nazism is on the march and this news will reinforce your paranoia. I bet you were overjoyed at this news. After your recent defeats and humiliation, I can’t blame you.

Elections have consequence and you lost.

Our visiting troll, LOL was none other than Jimmah and possibly Iceweasel. The IP adress was from Scotland.