Using his super-sekrit Glenn Beck Decoder Ring (everyone on the left is issued one) the Husky Ponytailed Blogger translated this doozy:

And all along I just thought it was the first line in the U.S. Constitution…

[From The Diary of Daedalus’ Ain’t Seen The Light Of Day Department, the following untitled draft by Heracles, 19 July 2010, was a cut and paste of an LGF post in text only, with no additional commentary. The text has been replaced with a screencap of Charles Johnson’s original post of the same date with embedded links and my commentary below. – Briareus]

Wow. Not only did Johnson label/libel Sheriff Paul Babeu as a racist, he attempted (and failed) to brand Sen. John McCain one as well just for talking with him. Here’s Johnson’s proof – A post from Media Matters that sources the Southern Poverty Law Center [cached]:

Here’s the link to the YouTube video featuring both Sheriff Babeu and Senator McCain:

Funny how some things from years ago are just as relevant today, unlike Charles Johnson. (BTW, the author of that MM piece, Eric Hananoki, was a staffer for The [defunct] Al Franken Show. Go figger).

Two years later Johnson was still at it, and Daedalus posted about it here.

Chuckie gets a job

Could it be that the gaseous, unemployed, public assistance addicted, jazz guitarist has found a job (that is not at McDonald’s)?  Oops sorry, it is his Doppleganger Charles C. Johnson aka “Ginger”. Never mind!

If this is true, it means the Trump campaign now has a no-shit overt white supremacist working on their staff.

The obese, mentally challenged, halitosis inflicted, sexually deprived, basement dwelling loser who loves to whine to twitter about people “stalking” him seems intent on gaining relevance by trolling and trying to pick a fight with Ben Shapiro. Give it up Fat Boy – Ben Shapiro is way beyond your addled range. Note that the Flatulent One’s number one butt kisser “Kragar” ( I see he got rid of the part which said “Proud to be a Kaffir”)  feels the need to temporarily put aside his bottle of cheap whiskey and chime in. All of a sudden Mr. Toot finds anti-Semitism reprehensible after tolerating it on his execrable blog since 2009.

@benshapiro This is complete bullshit. Six years ago, Ben: https://t.co/dFAr77dhg9

@Gus_802 @benshapiro And Ben Shapiro spent years profiting from the hate speech at Breitbart “News,” until it was directed at him.

@Green_Footballs @benshapiro You kept warning them too but they ignored you. I was there. The writing was on the wall.

@Green_Footballs @Gus_802 @benshapiro “This is why I’m leaving the GOP.”
“Dirty Splitter!”
6 years later:
“You never cared back then!”

North Korea’s take on the debates

The Dear Leader Kim Jong-Un has an interesting take on the U.S. election. If Trump is a “lunatic oaf” and Hillary is a “braying she-ass” – how would he refer to Mr. Toot? I would call  him  a “smelly old gas-bag”.

Palestinian father tries to get his son shot by IDF troops but the soldiers just shake the little boys hand. Remember when Mr. Toot would refer to this as “Palestinian Child Abuse”?

In days long numbered with the past, a certain gas bag blogger would prominently feature this story to illustrate the nihilism of the Palestinians. Not any more. All credit to the Israeli soldiers (actually I think they might be border policemen). I wish they would have plugged the father and taken the child (who appears to be no more than 4 years old) to Israel so he could be brought up civilized.

Is this Medieval France of the era of Plantagenet and Capetian Kings, or the intifada afflicted French Republic of the 21st century?

A beheading in Normandy. Are we talking about the times of William the Conqueror, Richard the Lionheart, or Henry V?  I guess you know the answer. We are referring to the ongoing intifada in La Belle France committed upon an 86 year old Priest by a member of the Religion whose name we dare not speak. Of course a wind bag, double chinned , halitosis afflicted blogger will remain silent.

Assailants linked to Islamic State slit the throat of an elderly priest and took several worshippers hostage in a French church on Tuesday before police shot the attackers dead.

It was the latest in a wave of attacks in Europe inspired by the Islamist militant group based in Iraq and Syria that is on the defensive against a U.S.-led military coalition in which France is a major partner.

Police said the knifemen entered the church during morning mass near the northern city of Rouen, west of Paris, killing Father Jacques Hamel, an 85-year-old parish priest, and taking four other people hostage, one of whom was seriously wounded.

Police shot the attackers dead as they emerged from the church with their hostages.

Speaking at the scene of the attack in the Normandy town of Saint-Etienne-du-Rouvray, President Francois Hollande said Islamic State had declared war on France and the state should “use all its means” within the law to fight the militant group, against which France has launched air strikes in Syria and Iraq.

The president called it a “dreadful terrorist attack” and told reporters the attackers had pledge allegiance to IS. The IS news agency Amaq said two of its “soldiers” were involved.

The attack was the latest in a string of deadly assaults including the mass killing in Nice, southern France, on Bastille Day 12 days ago and four incidents in Germany, most recently a suicide bombing at a concert in Ansbach on Sunday.

IS has called for its supporters to take action with any available weapons targeting countries that it has been fighting.

The investigation was handed to the anti-terrorist unit of the Paris prosecutor’s office.

Several French media reported that one of the knifemen was a local man who had spent a year in jail on his return from Turkey after being intercepted trying to travel to Syria, but had been freed on bail with an electronic tag pending trial for alleged terrorism offences.

The prosecutor’s office said the identification of the two suspects was still under way and it was too early to jump to conclusions about a possible link.

Police said one person had been arrested in connection with the attack.

Without waiting for such details, ex-president Nicolas Sarkozy, expected to enter a conservative primary soon for next year’s presidential election, jumped on the latest incident to accuse the Socialist government of being soft on terrorism.

“We must be merciless,” Sarkozy said in a statement to reporters. “The legal quibbling, precautions and pretexts for insufficient action are not acceptable. I demand that the government implement without delay the proposals we presented months ago. There is no more time to be wasted.”

The center-right opposition wants the government to put all Islamist suspects subject to a confidential security notice under administrative detention to avert potential attacks.

Far-right National Front leader Marine Le Pen, also expected to run for the presidency, said both major parties had failed on security. “All those who have governed us for 30 years bear an immense responsibility. It’s revolting to watch them bickering!” she said on Twitter.

Hollande insisted that the government must stick to the rule of law, which was what the hallmark of a democracy.

Pope Francis condemned what he called a “barbarous killing”.

“The fact that this episode took place in a church, killing a priest, a minister of the Lord and involving the faithful, is something that affects us profoundly,” Vatican spokesman Father Federico Lombardi said.

The attack heaped yet more pressure on Hollande to regain control of national security, with France already under a state of emergency 10 months ahead of a presidential election in which he is widely expected to seek a second term.

The Normandy attack came less than two weeks after a 31-year-old Tunisian, Mohamed Lahouaiej Bouhlel, plowed his heavy goods truck into a crowd of revelers in the French Riviera city of Nice, killing 84 people. Islamic State claimed that attack.

“Everything is being done to trigger a war of religions,” tweeted Jean-Pierre Raffarin, a former conservative prime minister who now heads the Senate’s foreign affairs committee.

Hollande visited the Normandy town with Interior Minister Bernard Cazeneuve, meeting survivors of the church attack and members of the emergency services.

Cazeneuve has come under fire from conservative politicians for not doing enough to prevent the Nice attack, which prompted lawmakers to approve a six-month extension of emergency rule.

Who is uglier, Rolling Stones guitarist Keith Richards or a certain Jazz guitarist?

We all know that Mr. Toot is very self conscious about his fading looks as he uses an avatar that is from at least 10 -15 years ago. However Rolling Stones guitarist Keith Richards is not ashamed  of the way he looks. The one with the best electric guitar and the best guitar wah pedal can’t look bad, he says.

The question though is who  is uglier – the craggy faced, former druggie, rocker who had a lot of sex, drugs, and rock & roll, or the pasty faced, corpulent, flatulent jazz guitarist who looks like the type of guy who you would not want to be around children?

I think that Mr. Toot is far more hideous. 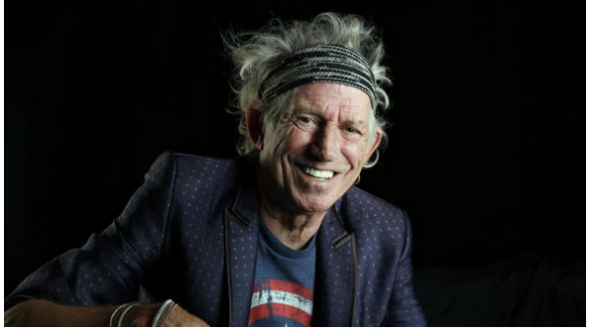 Debbie Wasserman Schultz asks “What is the greatest accomplishment of the Democratic Party?” Someone gives a response that would make a certain out of shape blogger’s head spin!

As you know Mr. Fatass always likes to  trash the Party of Lincoln making them out to be the worst bigots of all. Nice to remind Chunky (since we know he reads DoD) of the history of the Democratic Party.

Charles F. Johnson aka Mr. Toot, aka The Race Detective sees Nazis, racists, and assorted bigots all over the place. Yet how did he miss this piece of “white sheets bigotry”?  Somehow I suspect that the “Raaaaacism” radar he operates is defective and does not catch vile bigotry coming form the Left. By the way, the way things are going in America it is entirely possible we can one day have a President Bill de Blasio.

During a weekend press/political dinner that traditionally features skits, Clinton joked to de Blasio about the New York mayor’s tardiness in supporting her, saying “thanks for the endorsement, Bill … took you long enough.”

“Sorry, Hillary,” de Blasio said. “I was running on C.P. time” — a comment that some believed referred to “Colored People time,” drawing gasps from the crowd.

Leslie Odom Jr., an African-American actor in the hit Broadway play “Hamilton” who was also part of the skit, replied: “I don’t like jokes like that, Bill.”

To which Clinton jumped in with the kicker: “Cautious Politician time — I’ve been there.”

The bit did not go over well. New York magazine called it “amazingly unfunny” and “terribly executed,” while some Bernie Sanders supporters have called it downright racist.

“Speaking on CNN on Monday evening, Mr. de Blasio said that the exchange was part of a scripted event and that all parties were in on the joke, with “cautious politician” being the intended punchline.

“‘I think people are missing the point here,’ he said.

“The joke came just days after Bill Clinton clashed with Black Lives Matter protesters who accused him of advancing policies during his administration that hurt African-American communities. A day later, the former president said he ‘almost’ wanted to apologize to the activists.

“Mrs. Clinton has overwhelmingly won the support of black voters and will be counting on them again next week in New York.”