I know it’s been almost a year since we slapped CJ with the revelation of the infamous LGF comment #218822 (wherein, contrary to Johnson’s repeated claims over the better part of a decade, he did refer to Rachel Corrie as “Saint Pancake”), but there’s been a bit of a new development, and The Boiler Room  has caught him in yet another lie related to the whole episode.

You see, for the longest time, the BRC was unable to dive into the archives and retrieve the comment first hand, since Johnson had cravenly blocked the Internet Archive (Wayback Machine) from his site. Luckily, enough evidence of its original existence was to be found, and we were able to prove it indirectly. Still, it would have been nice to get a rough idea of how long it stood before it was [deleted], and the periodic snapshot caches taken by the Archive would have at least told us if it was in terms of days, months, years, etc.   To the point, we didn’t have much of an idea if this -one of the more definitive and comprehensive statements that CJ made about the subject when it blew up- was true, or complete BS: 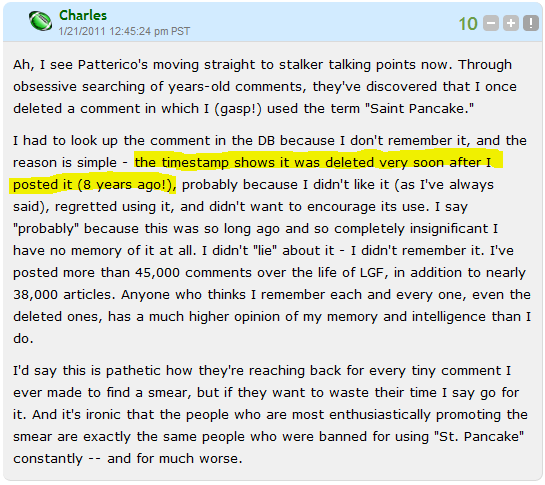 The mystery ends today (sorta).  How? Well, Engineer no. 5 sent out an email about how, curiously, the LGF block on the Internet Archives was no longer in place, and now anyone can freely browse again (whether this was intentional on CJ’s part or not, we’re not sure; it seems strange for him to lift the block like this after more than a year). Almost immediately (or, at least after I read the email), I stretched my ctrl+c finger, and started pluggin’ some choice urls into the interface.  What popped up* was pretty interesting:

Note the Feb. 2, 2006, which means that #218822 was actually sitting there on LGF unmolested for almost 3 years (at least; this date is the most recent snapshot we can find). So, CJ is lying in one or more ways:

To add insult to injury, Johnson could have been busted on this a long time ago, had a fact-check team such as the BRC been around back when the comment was still live. Check this exchange from 2004, in article #10619:

Unfortunately, we can’t be sure if the comment was still live in 2009, when we saw this:

Again, the lizards took him at his word.

Our theory? CJ realized that he made his emphatic statement on his 2010 Guardian article outside the comfort of his living room, and with the BRC also lurking he decided to scrub the comment and block the Archive, in an attempt to save face. We’ll probably never know for sure, but it is probable that comment #218822 was live well into 2010.

The takeaway? It’s hard to believe that he didn’t remember essentially christening a term that became associated with LGF for years, so we’re pretty much left to conclude that virtually everything CJ’s has ever said about the “pancake” issue has been a complete pile of BS (which highlights the lengths he’g go and the size of the web he’d weave to protect his ego).

*We can thank the loozards for the tip vis a vis WebCite. We’re keeping that strawberry.

Update: It appears that the screencap we grabbed for Johnson’s aforementioned “timestamp” comment differs from what I snipped today.  Can you spot the change (besides the additional updings)? 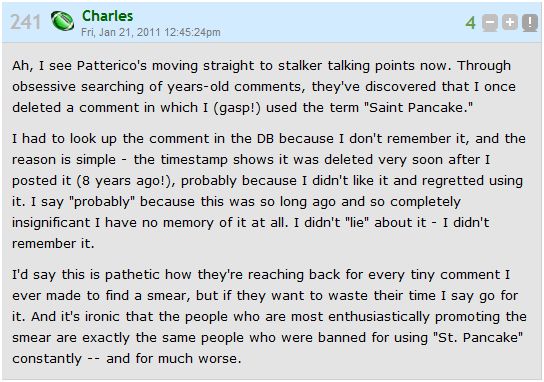 Update: For those who do not read here: