Alouette (aka Vicious Babushka) Called Out On Propaganda 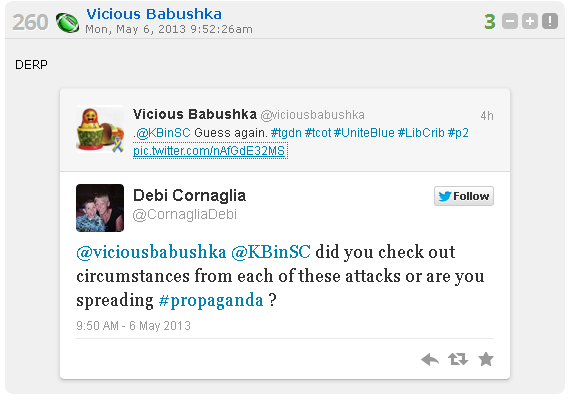 That “DERP” was proudly posted on LGF. Here’s the basic Twitter convo:

Fairly specious statistics, especially given the source, so I decided to fact check her obnoxious fat ass. Here’s what I found.

Exactly two U.S. Citizens were killed at US Embassies under President G.W. Bush’s 8-year tenure. One was Diplomat David Foy, targeted and killed by a suicide car-bomber at the Mariott Hotel outside of the US Embassy on 2 March 2006, Karachi, Pakistan. The other was a Yemeni-American woman from New York who was trying to get her new husband entry to the US and was killed with 18 others while waiting in line at the US consulate in Istanbul on 17 September 2008. Both were outside of the embassies.

I know it’s been almost a year since we slapped CJ with the revelation of the infamous LGF comment #218822 (wherein, contrary to Johnson’s repeated claims over the better part of a decade, he did refer to Rachel Corrie as “Saint Pancake”), but there’s been a bit of a new development, and The Boiler Room  has caught him in yet another lie related to the whole episode.

You see, for the longest time, the BRC was unable to dive into the archives and retrieve the comment first hand, since Johnson had cravenly blocked the Internet Archive (Wayback Machine) from his site. Luckily, enough evidence of its original existence was to be found, and we were able to prove it indirectly. Still, it would have been nice to get a rough idea of how long it stood before it was [deleted], and the periodic snapshot caches taken by the Archive would have at least told us if it was in terms of days, months, years, etc.   To the point, we didn’t have much of an idea if this -one of the more definitive and comprehensive statements that CJ made about the subject when it blew up- was true, or complete BS:

The mystery ends today (sorta).  How? Well, Engineer no. 5 sent out an email about how, curiously, the LGF block on the Internet Archives was no longer in place, and now anyone can freely browse again (whether this was intentional on CJ’s part or not, we’re not sure; it seems strange for him to lift the block like this after more than a year). Almost immediately (or, at least after I read the email), I stretched my ctrl+c finger, and started pluggin’ some choice urls into the interface.  What popped up* was pretty interesting:

Note the Feb. 2, 2006, which means that #218822 was actually sitting there on LGF unmolested for almost 3 years (at least; this date is the most recent snapshot we can find). So, CJ is lying in one or more ways:

To add insult to injury, Johnson could have been busted on this a long time ago, had a fact-check team such as the BRC been around back when the comment was still live. Check this exchange from 2004, in article #10619:

Unfortunately, we can’t be sure if the comment was still live in 2009, when we saw this:

Again, the lizards took him at his word.

Our theory? CJ realized that he made his emphatic statement on his 2010 Guardian article outside the comfort of his living room, and with the BRC also lurking he decided to scrub the comment and block the Archive, in an attempt to save face. We’ll probably never know for sure, but it is probable that comment #218822 was live well into 2010.

The takeaway? It’s hard to believe that he didn’t remember essentially christening a term that became associated with LGF for years, so we’re pretty much left to conclude that virtually everything CJ’s has ever said about the “pancake” issue has been a complete pile of BS (which highlights the lengths he’g go and the size of the web he’d weave to protect his ego).

*We can thank the loozards for the tip vis a vis WebCite. We’re keeping that strawberry.

Update: It appears that the screencap we grabbed for Johnson’s aforementioned “timestamp” comment differs from what I snipped today.  Can you spot the change (besides the additional updings)?

Update: For those who do not read here: 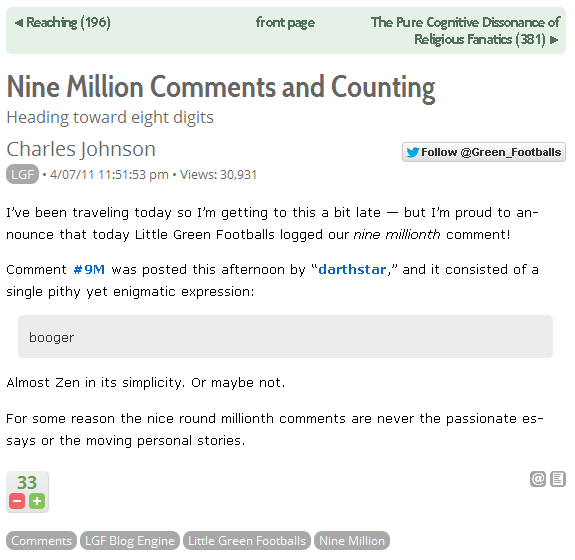 Of course we’ll stipulate that even one million comments on a blog is a lot, and that it is quite an accomplishment for any site owner anywhere.  And, hey, I was there for the 4 millionth, so even if lately it seems like CJ would rather that those old comments disappear, I say…congrats!

It’s just that with so many of the major contributors to that total who are now on this side of the Lizard Kingdom wall, there’s bound to be some “fact check your ass” goin’ on over here.  It just happens.  Plus, we’d like to think we know a thing or two about these millions of LGF comments.  Heck, we’ve been divin’, swimmin’ and splashin’ in the old swamp like kids on Red Bull for months. So I hope nobody minds, but we’re going to objectively examine the selection process for the “winning” comment.

First, we should give a little background, and mention that there’s been a long and well-documented series of these milestones of brief celebration over the years at LGF, and The Boiler Room crew uncovered many threads containing breathless lizard anticipation, as the comments poured in and CJ was busy behind the scenes making the calculations to determine who receives the honor of having posted the x millionth comment.

When the results were in, the winning comment, like all LGF comments, has a url and master comment number.  Based on the correlation, we can infer that CJ is including the [deleted] comments, along with those from memory-holed threads.  As far as we can tell, he essentially tried to figure out just how many times a human being sat and typed something and clicked “post comment” on his website, and pin down the exact spot on the lizard odometer. For the record, according to CJ…

We assume that he’s compensating for a tiny percentage of “gaps” that are scattered in there (we believe engineer No. 4 has spotted most of them).  But, oddly, it appears that there are less than a million comments between a couple of those milestones (for example, CJ chose his own comment as the 8 millionth, and it was designated 8003064, but the 7 millionth was 7003068.  How does that work?) In any case, to our knowledge, no one has ever disputed these results in the face of such confidence.  Besides, who’s brave enough to nitpick it?

The engineers down here (No. 2 I think it was) have discovered something in the archives that lead us to conclude that these now-immortalized comments fall short of their millionth milestones, for one of the “various reasons” that we’re not sure CJ is aware of.

You see, one of the time trials with The World’s Greatest Blog Search Engine™ happened to uncover a rather significant glitch in the LGF comment matrix. Like the “views” counter, we found a large reservoir of comments that appear… more than once.  For reasons which we can only speculate, there are (at least) 32,531 duplicated comments sitting in the archives, and they appear to have been included in the grand total for quite some time.

As a blogger, it’s pretty funny to see a “First?” comment at #60 (like from thread 18701_RoP_Strikes_in_India).  Oh what the heck, it makes a perfect throbbing memo:

Now, in the aforementioned interest of fact-checking, we made sure that this wasn’t just a visual thing, and that these duplicated comments had unique numbers that were being included in the grand total. Scrolling over them, it looked like they did, and were.  Digging a little further, it got kinda interesting.  Try this:

Pick a comment url from one of those old threads (for ease, I picked the first one): littlegreenfootballs.com/showc/1/2363284

The span of master comment #s which are effected by this are 2330836 –> 2363366, and their duplicates immediately follow at 2363367 –>2395897 (which is why the “add 32531” trick works).  Or another way to look at it: every comment archived from that point forward was artificially “bumped” by 32,531 in the LGF chronology. And, since the comments doubled for this section of the timeline, we’d expect it to jump right out at us on a graph, right? Well, remember this?  The anomaly is pretty clear: 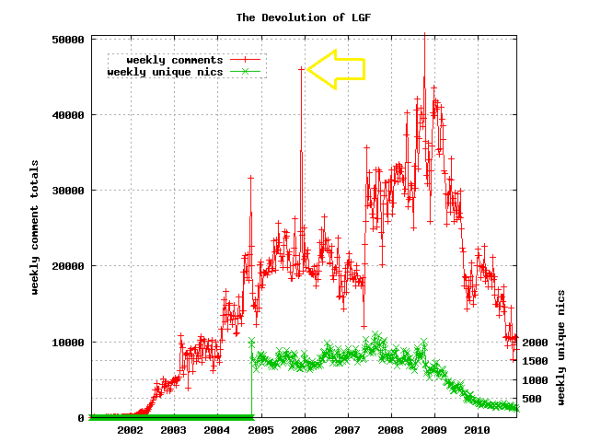 So there, it might sinking in over there at the swamp now…

I suppose the “glitch” itself is a little embarrassing for a self-described perfectionist, but what’s worse is what it does to all those millionth-comment celebrations and awards.  After all, we’re talking about the “ultimate majesty” in the Lizardoid Kingdom:

Ummm…OK, if you take the 32,531 duplicates out of the total count, it would put that Irish Rose comment down to 3,970,499, and the “real” 4 millionth comment would have shown up the next week, right about…here:

Oh NO!!!  That [deleted] comment belonged to NYC Redneck. ( Although, “[deleted]” would make an appropriate rotating title.)

Anyway, the same goes for the other milestones.  And, all this also means that we’ll be waiting a little while longer for the real 9 millionth comment, of course.

As for how the “glitch” came to be, we’ll leave it open to discussion, but I think the error had something to do with all that stuff that happened back in ’07 when CJ switched things over, and the archived comments were assigned those master numbers (and this batch of old threads had their comments copied twice, for some reason).  But, who knows?   Perhaps Charles can explain with a “tech note”.

Exit question: Are we springing this on CJ?