The doors been open. A lot. So something came crawling in, that caught Chuck’s eye.

And possibly a setup. As we will see, that was what Chuck was really worried about.

Well, Hatchling blows a sweet something into Chuck’s ear, and he decides to chance it.

So the thing about being offensive wasn’t the real concern. Anyhoo, one of his MENSAs comes up with this non-sequitur:

Well, maybe it has something to do with the fact that “kafir” (and various other spellings) is an Arabic word, that the Muslims use to describe an inferior socio-legal status, genius?

It’s all about you and the stalkers, innit, Chuck, you narcissistic moron.

So anyway, all the way down at comment 250, Hatchling decides to come out to play:

Well, gosh. There’s the darlin’. So if somebody shows up with the nic “anti-muslim”, you’re gonna let him play, right? Right, Chuck? Chuck? LET LUDWIG GO, you tyrant!!!

In Search of the elusive Quixote, Part III

Hope continues to fade for the endangered Quixote of Lud, with extreme cold weather from Great Britain to Australia, the beast may not be able to survive. There have been reports from the outer reaches of the internet however, of something resembling the Quixote here. Let me count the resemblences to the Quixote:

4. Comic book theme to remind him of his former idol, Chuck Johnson – check.

Spider-Man made a big deal of protecting New York from the GreenGoblin. But let’s be honest: scrapping a lycra-clad gimp on a hover-board is about as gutsy as wiping a pube from the bath.

Before you leap to old Spidey’s defense, we reckon we’re free to say what we like about him. Because we’re fighting a far greater peril…

The Earth is under threat from evil forces – a deadly combination of short-term thinking and lazy habits, and an ignorance generated by twisted minds spreading doubt about the seriousness of climate science. Damn those evil-doers.

Why they should choose to do this to our one planet, god only knows. The rest of us just want it to go on, engaged in its mysterious, rhythmic flight through its little corner of the cosmos. Seen from out there, at a distance, this place must still seem such a gift.

Yet it’s being destroyed knowingly. These super-crimes are being perpetrated by the only species capable of examining life and reflecting on its wonders. Yes, the human race understands gravity, DNA and mathematics, and is taking a stab at black holes and the Big Bang – yet some of us are clearly just still dicks.

So that’s why the Global Warming Superheroes have decided to fightback. You could say we’re like the Incredible Hulk. Now there’s a hero we can relate to: a scientist turned green and angry by a near-fatal dose of gamma rays. We too have been exposed to near-fatal doses: doses of gas from idiots denying climate science. Now we can be green and angry too.

We are, however, more patient than our monosyllabic friend. We don’t throw cars around, and our suits are still intact. Luckily our nemeses’ arguments are as wobbly as a hover-board, and one hit with the simple truth is enough to knock them back to earth.

This blog will contain all the facts you need to convince yourself which side of the fight you’re on. Still, we’re happy to stand by Hulk’s timeless warning, which gains added bite when the future of an entire planet is at stake:

“Don’t make us angry. You wouldn’t like us when we’re angry…”

Check out the denier rating of James Dellingpole:

I’m jealous. A perfect 10 in dickheadedness. I’ll have to try harder.

Could it be? Discuss.

In Search of the elusive Quixote, Part II

The last thread on Ludwig was almost like a wake. Most have given up all hope. Some wanted to leave messages on his inactive Digg page, but one suggested leaving messages on Miss S’s Digg page. Well, it doesn’t appear that any messages were left for Ludwig, but with 50 comments I thought the thread on hexavalent chromium was interesting, partially because it’s precisely the kind of Gaiasade that Ludwig would love the lead the charge with, but also because the comments weren’t exactly friendly.

I’m afraid that this is more evidence that Ludwig is on a safari in search of the Amazonian Polar Bear or the Arctic Giraffe or some other endangered species, because he wasn’t there defending her honor. 😥

In Search of the elusive Quixote

This blog is in distress. The primary source of material has been missing in action for over a week. In a desperate attempt to find evidence of the continued existence of the elusive Quixote of Ludwig, a call was sent out over the hailing channel of the internet:

The results aren’t very encouraging. Most replies were references to Diary of Daedalus and Blogmocracy, with a significant number of echoes of Ludicrousness at Littlegreenfootballs 1.0. However, there were a few faint pings from outside of this triad, though most of them lead back to the triad.

END_OF_DOCUMENT_TOKEN_TO_BE_REPLACED

Some wiseacre going by the handle “Wanker678” managed to create some Urban Dictionary entries:

The guilty party will step forward or you’re all banned.

It looks like we’re not the only ones jonesing for some Lood:

Gus 802 Pining for the Fjords?

It’s starting to appear that even Gus has had enough of the totalitarianism of the BVoAF:

By way of background, this is in reference to this rather Stasi exchange earlier in the thread:

Lanzman’s toast (you’re welcome to join the stalkers, Lanzman), and Gus is axing for it.

End game at the swamp.

This has got to be the most transparent example of cut-and-paste blogging displayed yet at the BVoAF:

Note that he displays this somewhat technical argument, posing by it, without displaying any evidence that he actually has the foggiest idea what it means.

This makes no sense whatsoever. 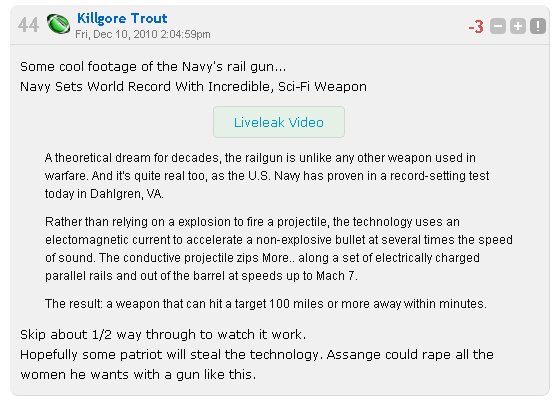 The video link is here. Despite Killgore’s reference to Assange, this is NOT anything leaked by wikileaks; and appears to be totally ok with the DoD.

My only comments are:

2. Does this dope have any idea how much money all those racks and racks of capacitors costs? This isn’t some technology that anyone’s going to “steal”. This is for state actors, only.