IIRC Imani Gandy, aka @AngryBlackLady, once had an account at LGF but was banned after too many racist comments. She doesn’t appear in the BRC Master Blocked List, so she may have been reinstated at some point. She’s included in Charles’ “Some Of My Best Friends Are” list, and he still plays footsie with her on Twitter.

Charles gets the wiggles.

Ninety Days In The Hole

Alexa: “Is it little, green and deflated?”

Alexa: “Does it have a pony tail?”

Johnson’s ride is steady as he blows, and the February bump didn’t help him much. Gotta feed those bots, Charles. Alexa has some other features, like this:

That’s the LGF audience by nation for the last 90 days. For comparison, here’s the same world coverage for *ahem* another blog for just one week:

Sure, Lolo Grease Fumbles gets more traffic, but very limited attention world-wide. Like none. Keep your chins up, Chuck. It’s all downhill from here.

“The War on Women is global, The Republicans are taking part in it”

Dark Falcon made some good points over at LGF about the “war on women” canard from the Left. The real war  on women is not being done by Republicans here in America. The Islamic State is engaged in a real war on women as we speak. FemNaziBitch insists her civil rights are being attacked by Republicans.

Wenchrewnch chimes in and accuses Republicans of being part of a global war on women and killing females in the US.

There is a genocide against women being committed by Republicans in the United Stated ?

A BC branded #WarOnWomen is in no way like real ones, & #Liberals need2 just stop the crazy. http://t.co/f30R7PcJVB pic.twitter.com/hWhEBDWDP7

This is the tweet that started the conversation about “the war on women” claim by the Democrats.

That is a war on women!

Charles Johnson is a now a class warrior. In his take on Paul Ryan’s budget, he is very concerned how it would impact lower-income people.

Charles if lower-income people depend are more dependent on government services, they would be the most effected. It’s not some evil sinister plot by Paul Ryan (R-WI).They still will receive assistance Charles. The goal of the budget is to get our fiscal house in order. That will produce a better economy and there will be less lower-income people.

Clearly The Sage of Culver City is economically ignorant as well

The Sage of Culver City claims he defeated Glenn Beck

Charles had a grudge against Glenn beck. In the summer of 2009, Beck mocked Chuck as just Jazz Guitarist. Since then there were weekly attacks on Glenn Beck. Today Glenn Beck and Fox News announced that he would no longer being doing a daily show. Instead, he will focus on making specials for the new station. Charles twists this news to make it seem he won some victory over Glenn Beck.

Chuck, what has happened to your ratings in the last year and a half? They are so miniscule, that you stopped using Alexa and instead you’ve made up your own figures. Also, this is another case of Chuck, linking without thinking. From the article he references to, here is what it says.

His departure was jointly announced in a statement on Wednesday by Fox and Mr. Beck’s company, Mercury Radio Arts.

Fox News and Mercury Radio Arts, which have clashed over the making of “Glenn Beck,” will “work together to develop and produce a variety of television projects for air on the Fox News Channel as well as content for other platforms including Fox News’ digital properties,” the companies said in the statement.

In the statement on Wednesday, Mr. Beck said he would be starting a “new phase” of a partnership with Roger Ailes, the chairman of Fox News. “I truly believe that America owes a lot to Roger Ailes and Fox News,” he said.

Mr. Ailes said in the statement, “Glenn Beck is a powerful communicator, a creative entrepreneur and a true success by anybody’s standards. I look forward to continuing to work with him.”

This hardly seems like Fox News dumped Glenn Beck. It’s more likely a case of Beck burning out doing a daily show and instead will focus on producing and doing specials. This is actually a step up careers wise. Unlike The Sage of Culver City who continues to live in an imaginary world of relevance.

Charles, you’re not having a last laugh. You are once again showing yourself to be a delusional fool. The sad part is, there are fools like racist, Killgore Trout who really believe that Charles had some victory.

Killgore, your master is an insignificant smear merchant who has become an online joke. He didn’t win any victory as much as you would like to delude yourself. When Charles makes 32 Million in one year, let us know.

The Sage of Culver City link without thinking again

The Sage of Culver City proves once again, he’s  a linker and not a thinker. In his latest gaffe, Charles links to a Christopher Hitchens article.

Why is this another mistake on Chuck’s part? Well the Jazz Man has been blaming Pastor Terry Jones for the Koran riots. Here Christopher Hitchens blames Afghan President Hamid Karzai.

But this narrowness pales beside the truly awful opportunism and cynicism of Afghanistan President Hamid Karzai. In previous cases of irrational violence, such as the bloody riots that occurred on the mere rumor of a Quran being desecrated in Guantanamo, he had taken quite a responsible line (pointing out, for example, that one library destroyed by the incendiaries had contained several fine old Qurans). Unlike some provincial mullahs, Karzai also knows perfectly well that the U.S. government is constitutionally prohibited from policing religious speech among its citizens. Yet, when faced with the doings of the aforementioned moronic cleric from Gainesville, he went out of his way to intensify mob feeling. This caps a long period where his behavior has come to seem like a conscious collusion with warlordism, organized crime, and even with elements of the Taliban.

The Sage of Culver City clearly has problems with reading comprehension. Another post and once again Chuck’s theory is contradicted by the article it links. Charles Johnson clearly is not even a great linker, let along a thinker!

The Sage of Culver City spews another lie

It is fair to point out that the sage of Culver city is a liar. he has lied about his role and goals in Rathegate. Now is lying claiming that Fox News has hired Donald Trump. 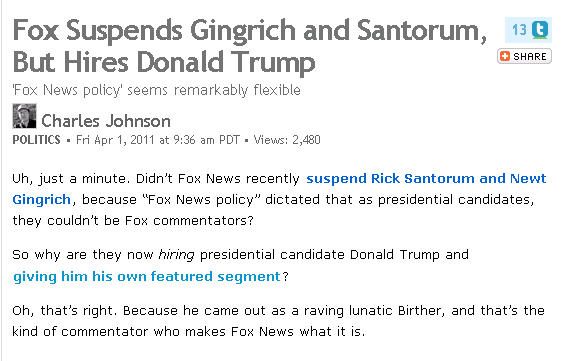 Here is the truth, Charles go this story from the Hufington Post. Well here’s the headline from that article.

Here’s what the article Charles linked to actually says.

As Mediaite’s Frances Martel notes, while Trump is merely making a weekly guest appearance and is not becoming a Fox News contributor, “it is surprising to see a potential presidential candidate assume a media role so close to the election.

Trump is not being hired by Fox, but will just have a weekly segment. That’s a huge difference than him being hired. Once again, Charles lies in his headline and the story he links to contradicts it! Another day and another lie by the Sage of Culver City.

The Philospher King claims he was duped and downplays Memogate

The greatest philosopher since Plato, the Sage of Culver City comments on the about Fox News executive Bill Sammon’s comments. Sammon recently said he didn’t think Obama was a Socialist but didn’t prevent others on FOX News from saying that. This story is a nontroversy since he can’t control what others say. Charles tries to make an issue out of this and then apologizes for believing that about Obama in 2008.

So the Jazz Man admits to being easily manipulated by Conservatives. Has it occurred to him he might being manipulate now? Clearly he has no original thought and is just a propagandist.

One of hs commentators then points out that Leftist new outlets push an agenda and used Memomgate as an example.

Memogate was Chuck’s crowning glory. That was the story that put LGF on that map and made him a player. As we have seen, he has turned his back on his once Conservative past. Chuck however was always proud of Memogate. That is until now!

So now CBS News didn’t know the memos were false. Does the phrase: “fake but accurate” ring a bell? Clearly Charles is now distancing himself from his taking down of Dan Rather. At the time, everyone knew CBS was doing a hit piece on Bush. Charles was one fo the heroes who stopped this smear. Now he is disavowing his role to smear the right and defend the left.

Charles Johnson, you are the new Dan Rather. Your whole Blog is fake but accurate. The Sage of Culver City is a linker and not a thinker!