Charles Johnson. What a Hero. So where do we start?

One discourages mass murder, the other advertises an easy target.

More news has come out regarding the deranged gunman who killed 17 at Stoneman Douglas High School in Parkland, Florida, with more proof that it was ultimately law enforcement failure that allowed Nikolas Cruz to achieve his psychotic goal. That’s right. Laws and procedures were already enacted and n place to stop this fuckface, but they were not enforced.

So who does the left blame? Donald Trump, the GOP, Marco Rubio, the NRA, and Dana Loesch. None of the MSM pundits blame the asswipe who did it, Nikolas Cruz, and none of them blame the local police or FBI for ignoring the clues, threats and tips.

And so does Charles Johnson, who brags that he lives in a gated community and owns a Mossberg assault weapon.

Some students sought to speak to the POTUS directly, while others were apparently given scripts and used as props by CNN to advocate for more firearm restrictions. These kids are distraught and grieving for their lost friends, and they’re vulnerable to manipulation. 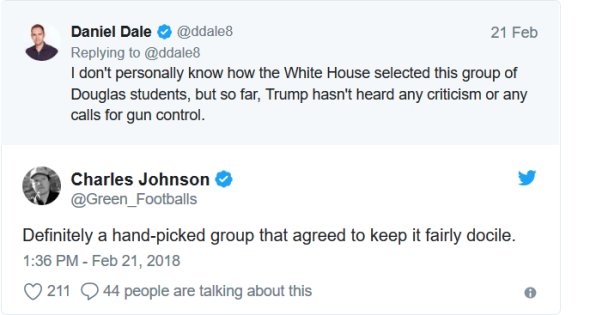 So let’s discuss this civilly. Here’s a comment from the thread above:

Yes, and that father demanded security measures comparable to those in other government facilities, like courthouses and Barbara Streisand’s Malibu McMansion.

So did Charles Johnson blame the Parkland school shooting on Dana Loesch like he blamed Pamela Geller for Anders Breivik‘s mass slaughter?

Dana Loesch met Charles @Lizardoid Johnson years ago but he erased his account content. After ongoing unwarranted harassment, this was her assessment:

The Race Detective claims to have made a huge discovery. Using some obscure Leftist NGO as a source, Charles claims that Nazis are giving online support to Republicans.

Charles Johnson’s Nazi obsession is the ranting of a mad man.

Update: Charles tried to tie the NRA to the Newtown shootings. His evidence? That Nancy and Adam Lanza held NRA certificates. After background checks,  those certificates may be obtained by anyone for $35, including Charles “I Got A Mossberg” Johnson.

END_OF_DOCUMENT_TOKEN_TO_BE_REPLACED

The Sage of Culver City is a huge defender of leftists causes. His latest one is Gun Control. Recently Florida passed a law prohibiting doctors from asking their patients if they own guns and where they store them. This mae Charles angry and he came out swinging in favor of Gun Control.

He supports Global Warming activism, redistribution of wealth and now Gun Control. Only one cause stands in the way of him being accepted by the Left. He has yet to formally abandon Israel. He allows Iceweasel and her gang to trash that nation, thus a defacto abandonment.

The Sage of Culver City claims the NRA and Tea Party are trying to silence the AAP. Well, it’s called politics Charles. Just like you believe in silencing those who oppose Obama, by labeling them racist. Emperor Hero Cheetos is a political child.