Correlation, Causation or Copulation? You Decide.

The Boiler Room Crew has a rep for bringing to light the best ChuckFactChecking of the entire internest.  What makes the BRC tick is that we all hate each other. Fortunately, most of the mudslinging goes on behind the scenes, and the emails are of little interest to anyone but us BRC bastards.

When a BRC Engineer proposes a project, the emails usually begin with a single word: “Bullshit.” Then the other Engineers tear it apart, slinging data and arguments until someone dares one of the others to post it. By that time, the post has been vetted as stone-cold and solid, and we all return to the foosball table. Here’s a recent example. 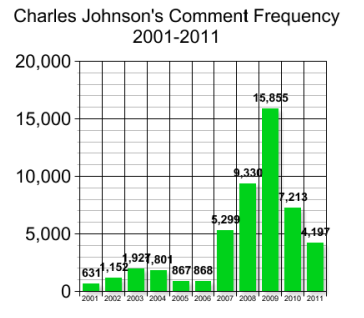 Many folks on this blog have noted that the number of comments on LGF dropped off significantly once Charles began commenting more. One of the BRC opined that it might be interesting to correlate Charles’ increased activity on LGF with the reduction of lizard comments over the same time span. The reply from The Boiler Room was typical. “Bullshit.”

Engineer No. 5 completed the requested assignment without complaint and added:
How’s this?  It’s average monthly comments for CJ and everyone, averaged across 6 month periods.  That spike in the second half of 2009 is due almost entirely to September in which CJ went apesh*t banning anything that moved, or didn’t move, or thought about moving.
It seems to show that LGF grew like a mofo before CJ joined the discussion.  Of course correlation isn’t causation, but in this case, who cares.

Also, iceweasel made its first appearance May 8, 2009.  Coincidence?

To top it off, you just can’t beat an arbitrary graph that looks like a reclining decapitated bimbo to make the point. Engineer No. 5 has since been promoted to BRC Bastard 1st Class.
Congratulations are in order.