Rather than hunt for (or recreate) screencaps of Charles v1.0 comments, let’s just pour some straight out of the bucket.

I just realized … that’s it! A new explanation for global warming—it’s the Jews’ fault!

But after reading Crichton’s book, with its voluminous research and documentation, and after speaking at length with a good friend who is a climatologist, I’m almost certain that at the very least, the danger is being greatly exaggerated for political reasons.

In the links above, there’s a story about a society of physicists numbering over 50,000 members that is strongly questioning the IPCC “consensus” on man-made global warming.

I have that study open in a browser window right now. Looks like Greek to me.

But the conclusion is very interesting.

Just for the record, the jury is still out on global warming. I’m reluctant to endorse either side, because the issue has been politicized beyond recognition.

I don’t recall asking you for advice on what I should post at LGF.

In yesterdays Jindal thread I said that creationism and global warming shared one distinction. Both are born of junk science and propaganda.BEWARE of a merger of the two.There are those who preach the “Green Gospel”Global warming is a crises created by the sins of man and all Gods children have a moral duty to correct.

Now add the apocalyptic kooks who believe the only way to save the planet is to drastically reduce the human population.

That’s ridiculous. There are reasons to be skeptical about anthropogenic climate change, but comparing it to creationism is beyond absurd.

Some opinion with charts and facts . For the truly open minded.

And for those whose minds aren’t so open their brains have fallen out:
CO2 Fairy Tales in Global Warming, by Gregory Young.

Oh what the hell. Here’s one more for the road. 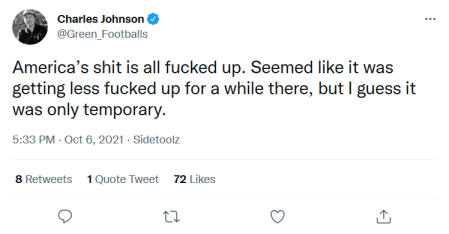 Charles. This is kind of bizarre even for you.

I don’t know why I find this funny, perhaps because it’s another one of Charles Johnson’s inane cut-n-paste jobs of articles and documents that he didn’t bother reading or couldn’t comprehend. Maybe we should do it Mark Levin style: 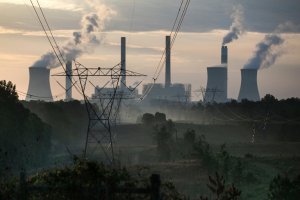 “OKAY STOP. Holy crap. Who thought one of the biggest energy plants in the world, Plant Scherer, might produce carbon dioxide, the stuff that plants breathe? It’s coal-fired. Cheap energy. SO WHAT? They have scrubbers, and the clouds you see coming out of the reactors are steam. Water vapor. CO2 doesn’t even come close to doing the climate change dance that water vapor does, and the oceans are pros at it. The oceans beat out the jungles (I mean the rain forests) for methane generation, and there’s not a damn thing we can do about it.

“Guess where the coal comes from to run Plant Scherer? Wyoming! Why it’s not coming from Appalachia I don’t know. Has to do with economics. Okay, Go on…”

I can’t do Levin like Levin, but here’s what’s got Charles and others all squeevy. A draft of an unfinished report was leaked today entitled

and every blogger (including Charles Foster Johnson) who linked to it, apparently read it, checked out the the footnotes and quoted sources, and vetted it in under 10 hours. ALL 549 PAGES OF IT.

P.S. Here are the direct links that Charles proffered:

www.nytimes.com/2017/08/07/climate/climate-change-drastic-warming-trump.
Lisa Friedman is a one-note nutcase with mental myopia and a small weight problem.

Rip it up, me bloogs.

Charles Johnson Attacks A Dead Man (And It’s Not Breitbart)

Something flew up Charles Johnson’s HooHah recently that got him to post a series of Tweets attacking the late Michael Crichton. Unfortunately, Mr. Crichton isn’t around to defend himself, so he’s an easy target for Mr. Hypocrisy. 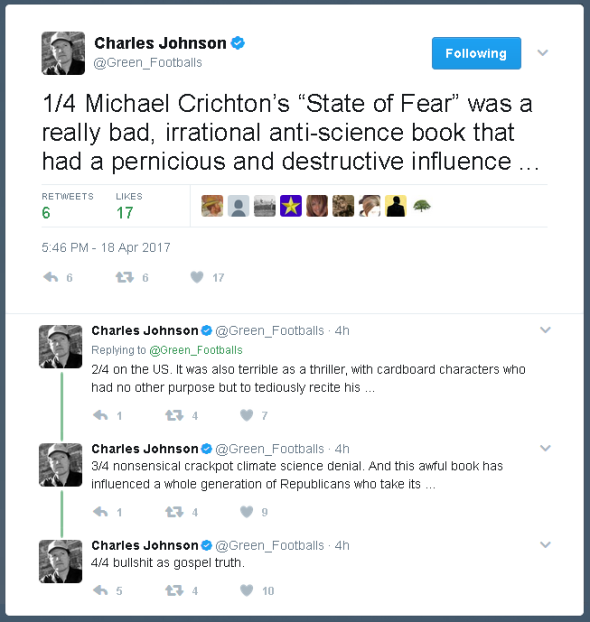 Michael Crichton was a successful formulaic novelist who based his themes on research. Many of his novels had similar characters thrown into similar situations with similar challenges, yet they were entertaining. “Jurassic Park” may be his most famous work. My favorite was “Eaters of the Dead,” a retelling of Beowulf with the hypothesis that Grendel was not a dragon but a tribe of mountain Neanderthals carrying torches to drive out the invaders.

In “State of Fear” Crichton used his typical formula for a fast-paced novel, but the Appendices were where the meat was. He included graphs and links to data sites (including NASA) to show that Global Warming was little but promoted hysteria based upon false assumptions. Shortly after SoF was published, NASA took down the referenced links, and subsequent edited copies of the book deleted reference to them. Someone got pantsed.

Now back to Charles Johnson. Why is he suddenly bothering with a novel from ten years ago? He fights with a dead man, offers no evidence to contradict Crichton’s sources, and remains an ignorant blowhard. Charles, your a mess.

P.S. Crichton was interviewed by Charlie Rose in 2007. Worth watching. Jump to 20:00 for the question on Global Warming.

Update: Charles was indeed a fan of Michael Chrichton, as evidenced by his comment on 4 March 2007:

Whoa. That’s some heavy-duty non-scientific speculation there, Charles. Anthropogenic Global Warming and subsequent catastrophe will be triggered by a political party in the U.S.? The GOP has that power? Awesome.

Charles, if all the icebergs and sea ice melted, sea levels would remain the same due to displacement, so they don’t count. Since water freezes and melts at 32 degrees Foster, polar temps would need to exceed that point and stay there for thousands of years before enough land ice runoff trickled into the oceans and put Culver City under water. If that happens, most habitable regions of the globe will turn into Papa John’s Pizza ovens with no delivery available… hundreds of years from now. Maybe.

Kind of a long shot there, Charles, since Mr. Sun appears to be in a cooling phase, and he’s the one truly responsible for global climate change, along with the GOP.

But there’s another factor involved. Plate tectonics cause land masses to rise, sink, bend, warp, bulge, tilt and shift. Magma is plastic and has nothing to do with AGW, yet it contributes to the rise and fall of sea levels. Another cause of flooding is coastal erosion, much like what we’re witnessing in real time in Charles Johnson’s brain function. Others have noted the erosion as well:

[BREAKING NEWS: CANADA AND MEXICO ARE GOING TO BE UNDERWATER AFTER TRUMP’S INAUGURATION. FILM AT NEVER.]

And so it goes. Charles, you’re a mess.

Billions will die! That was the Elusive Quixote’s famous phrase which brought laughs to us at the Diary of Daedalus. Charles promoted a post by Far left commentator Interesting Times (publicityStunted). He links to some story that claims we are on the verge of  total destruction! 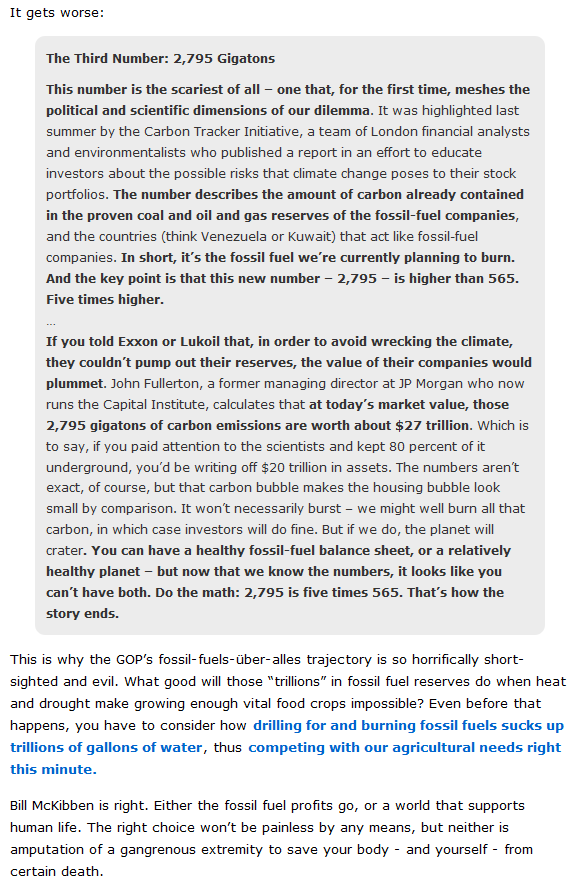 I am so scared reading this! I don’t know what’s the point of life, since I am going to do from Global Warming. I love Science Fiction, but not when it leads to hysteria like this.

Update: The Elusive Quixote makes an appearance! It took a thread about that we are on the verge of extinction to bring him out of his hiding place. The Elusive one even says he can only do a quick post and run. He is still trying to avoid his predator and fomer lover Iceweasal. 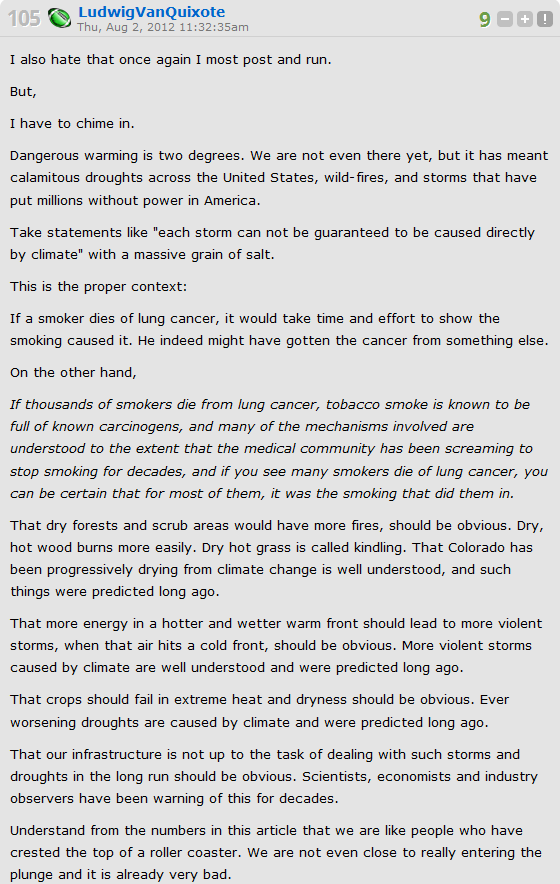 The Elusive Quixote goes on a  rant about Republicans being evil and not attacking people who ride electric bicycles.

Billions will die and only Charles Johnson can save us!

The Sage of Culver City wishes he had thought of this

Around 20 Nobel prize winners will preside over a mock courtroom in Stockholm on Tuesday, with the Planet Earth and humanity on opposing sides of the case, as part of a symposium to highlight global sustainability.

“It’s a civil court case to see whether we’ve breached our relations” with the planet, “and to see how to restore that relationship,” symposium chair Johan Rockström told reporters at the Royal Swedish Academy of Sciences.

“History will in any case judge us,” Swedish Environment Minister Andreas Carlgren told reporters, explaining the “trial” was actually about humanity judging itself with future generations in mind

Is it possible the Elusive Quixote will be one of the judges? Will Charles Johnson be one of the witnesses against Humanity? If that is the case, he’s the perfect case against humanity. I am sure the Sage of Culver City wishes he had thought of this idea!

The Return of the Elusive Quixote

This raises Ludwig’s hope and pay attention to his favorite verse.

The small town college Physics teacher shows his misogynist side. He thinks that verse will make the song popular with the pop music crowd. However, Slumbering Behemoth throws cold water on Ludwig’s hopes.

Ludwig didn’t appear on the rest of the thread. He once again disappears before Iceweasel and her gang can target him for his oral sex reference.

I have faith t Elusive Quixote will be sighted again! He’s out there watching and lurking!

Ludwig does his comedy routine for our enjoyment.

Ludwig really is a funny person!

Well it seems the racist Christian hating Ludwig VanQuixote is a coward. Rather than deal with the political reality that people aren’t buying into the Tranzi Progressive Ideology and its Global Warming scam, he is running away. He has announced he’s planning to move to Canada!

Ludwig I’m glad you are leaving. It’s scum like you that is preventing us from being a great nation again with your debt based economic policies and appeasement of Islamic aggression. Good bye and hurry the hell out!