The Ruse and Fail of Little Green Footballs: Part I – Overview

This is Part 1 of a multi-part monograph about a blog named Little Green Footballs and its founder Charles Foster Johnson. Although he will likely consider it a “hit-piece,” the intention is nothing of the sort. The purpose is merely to illustrate a microcosm of the blogosphere, the history and dynamics of a once-prominent blog and its founder, without judgment, prejudice, hyperbole, vitriol or snark. We’ve attempted to present an unbiased story based on factual evidence, citing sources when necessary.

Some of the following is by necessity purely anecdotal and/or speculative; however, objectivity is the goal. We don’t intend for this monograph to be a comprehensive summary of the history of Charles Johnson and Little Green Footballs, as it spans more than a decade. There’s just too much to cover in detail, so we’ve chosen to illustrate specific events – a general timeline with commentary.

This documentary was compiled over a span of months (indeed some of the referenced work goes back years) with the majority written prior to the untimely demise of Andrew Breitbart. Those sections where he is mentioned have not been rewritten to reflect his passing.

So with that out of the way, let’s take a curious trip down memory lane. –Ed.

END_OF_DOCUMENT_TOKEN_TO_BE_REPLACED 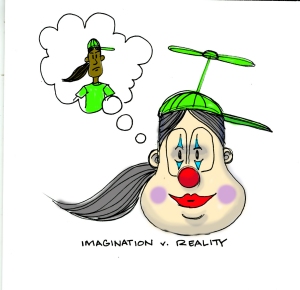 This week saw an interesting and enlightening week on Twitter. The martyrdom of @Citizen10 earned The Round Mound of BeClowned more infamy as he’s been trashed now on Dana Loesch’s radio show (we were happy to supply her with all the documents his shit stained fingerprints were all over), and his relations with other, more relevant Tweeps are seriously being strained.

The next couple of weeks might be fun, and I envision Chuckie staying up at night with an IV drip of Pepto Bismol. The BRC has got another set of lit paper bags for him to step on, and for sure he’s going to oblige (after all, his fame is now predicated by our BeClowing him and showing it to more famous conservative Tweeps. His blog is literally dead).

In the spirit of imagination vs. reality, the them for tonight will be in that same vein. Well, not really, we end up posting whatever the fudge we want to but it’s a departure point. So, have fun with it.

As for the Twitter themes this week; the mocking awards should go to:

2.) Most obvious ass kiss.
I think that my most shining example is probably Johnson licking @Angryblacklady’s underboob sweat and tweeting her whenever he’s implicated for twitter banning people. things that make you go….hmmmmm.

3.) Most Ironic Tweet.
This would have to be Moulista retweeting Johnson, especially aft their long history. In the end, Marcos made Johnson his emasculated bitch, and Charles now stands up on hind legs for Moulista’s formunda cheese.

Have fun, and you know the DoD’s drinking rules. Two sips for a youtube video embed, and a shot for a tweet.

From an anonymous DoD reader comes an early xmas present, dropped into our comment section:

You’d think that would have been the final word on that.  I mean, blocking the Wayback Machine and Google cache can’t be described as a liberal or conservative thing, right?  This would be one of those core principles a blogger possesses, one that a person can’t be duped into by way of right-wing propaganda, or by the charms of a Shrieking Harpy or Jim “Dim” Hoft.  You’re either a “craven coward”, or you stick to your anti-revisionist guns.

And the Google cache? Yep, you guessed it (I’d link, but you’d just be redirected).

But HOLD ON!  Charles did update that thread shortly after it was posted:

Oh, so Kos didn’t send the comment into the memory hole?

I don’t think I need to say it…

BTW- Today, that Kos comment link works just fine for me, as does their access to the wayback machine and Google cache.