1) Anders Breivik never once mentioned me or my site by name. He included articles from other places that had links to LGF in them.

No, Charles. Breivik linked directly to your website, quoted from articles that you posted and promoted, and named you multiple times. You took responsibility for your own content with the statement “I AM Little Green Footballs. It’s only me.”

Remember when Charles Johnson claimed that Robert Spencer, Pamela Geller and others were responsible for deranged madman Anders Breivik’s murder spree in Oslo within hours of the shootings, merely because they were mentioned in his “Manifesto?” 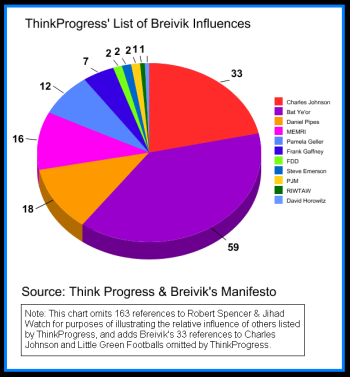 Remember when Glenn Greenwald found it, verified it and reposted it? Heh.

Remember when we turned the ThinkProgress bar chart into a pie chart?

Even LGF communist in good standing Sergei Romanov pointed out the obvious.

Remember when we showed how anyone could easily verify it with a simple word search?

Charles Johnson is a lying coward. At least Glenn Greenwald is honest.