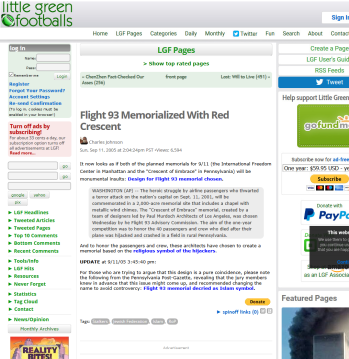 Charles, you have never been glib.
Inane, hyperbolic, petulant, self-absorbed and flippant? Always.

Al-Qaeda’s attacks on 9/11 happened 15 years ago. During that time span Charles went from being at the forefront of anti Jihad to being a social justice warrior. He no longer focuses on Jihadists who thankfully are killing themselves in Syria, but instead rants about Nazis.

I do find the Alt Right disgusting and they deserve all the scorn in the world, but I find the various Islamic groups bad as well. 15 years after 9/11, Charles has forgotten who attacked us.

The following are Charles Johnson’s own unedited comments as they appeared on Little Green Footballs, 11 September 2001.

The creatures who did this were not human. Humanity is something you choose; when these things chose their course, plotted their evil, and carried it out, they relinquished the privilege of being considered human.

Even more sickening are the scenes of celebration coming out of Palestine and other Islamic states. Such hate. Such joyous embracing of evil. It’s just soul-wrenching.

Jeffrey just put up a note. I haven’t been able to connect to the Morning News, or to Metafilter or wholelottanothing.

So what exactly fills you with “disrespect?” The idea that we know who the enemy is? Do you disagree?

Or are you simply expressing the knee-jerk, unthinking European criticism of anything American that I’ve seen so many times? That’s what I think, and frankly, it’s very boring, and very ignorant. And at a time like this, very inappropriate.

If you have something thoughtful to contribute I welcome it. But if you continue to equate the Israelis with the Nazis, you may get banned. Think before you write.

And isn’t this the central dilemma of trying to deal with monsters like these—that they feel no similar hesitation about involving innocents? And in fact, that they deliberately target innocents?

This is the horrifying reality that Israel has been dealing with; when the monsters create the rules, how can you avoid taking on some of their attributes in the battle?

Charles Johnson has some nerve

At LGF Charles has this on the upper right corner.

Charles Johnson really has some nerve to put the image of the WTC. He is friends with Mohamed Ansar who is a 9/11 truther. He has turned his back on the anti-Jihad movement and now supports the Muslim Brotherhood. Have you no shame Charles?

The Old Charles was pissed about foreigners attacking the US.

…while the new Charles is ticked off at his former compatriots.

Charles Johnson mocks 9/11 with this video.

Charles, you think that’s cute? I know plenty of people who would punch you in the face for that.

The Sage of Culver City comments on Bin Laden’s death

9/11 gave rise to LGF. In the years since Charles had risen to great heights, then self destructed. The Sage of Culver City comments on Bin Laden’s death.

Charles, now can focus on the Ron Paul-Nazi threat!

Blogmocracy is having issues, so this thread can double on Bin Laden talk as well.

Okay, so are you all strapped in and ready to go? Hardhats on? Great. We’re going spelunking into the dark depths of the Memory Hole. Now before we descend into the vapors of the tar pits, check out this quote for accuracy:

“‘Pretty much center-left before 9/11.‘  Charles Johnson’s blog discusses topics related to the War On Terror.”

Nope. That’s not an old pitch. That’s a screenshot from a current Kindle advert captured today. For 1.99 British Pounds ($3.18) per month, you can get LGF delivered to your doorstep from across the pond. Now let’s take a closer look at the advertisment:

Heh. Got the old LGF Anti-Jihad logo on it. After enlarging it, it appears that the post is dated 16 October 2007, but it’s still kinda fuzzy to read. So I did what any SwampSpelunker would do. I Googled it… and guess what?

Yup. It’s gone down the Memory Hole. Can’t find that post in Google cache either, because it bounces right back to the current LGF Front Page to rack up a baker’s dozen views on Charlie’s Magic Mojo Counter. Now that my curiosity has been piqued, what should one do in a situation like this? 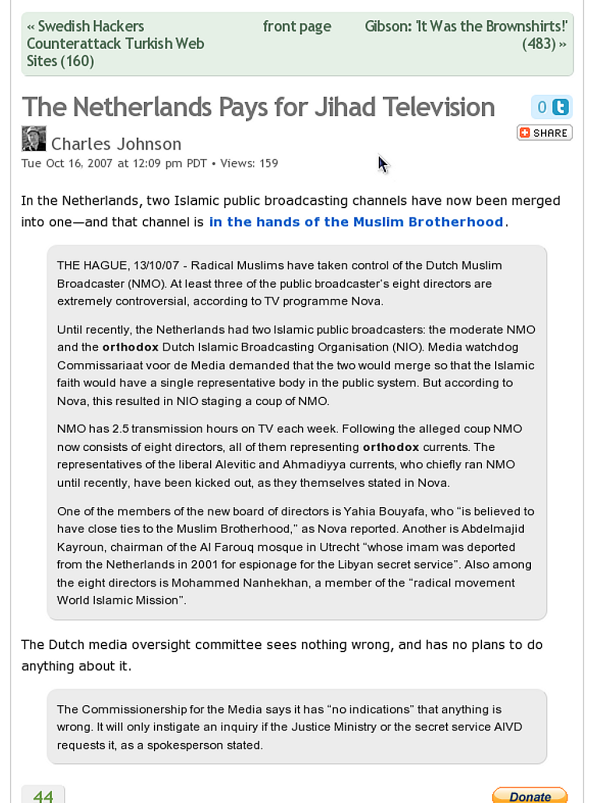 There he was, at the peak of his game, and recently Charles decided to vaporize that thread in its entirety. Maybe the LGF TrueViewValueCount was too low.

[Correction – Apparently the post was not deleted.
“The Google thing – redirecting all searches like that to current LGF
front page – is something Johnson did, seems like CZ had a DoD article
on it before.  But just because that happens doesn’t mean the old LGF
post isn’t there and accessible via direct link, because it is.” – NS]

The Real Story Behind the Deleted Flight 93 Memorial Threads

In light of some unsatisfied curiosities that emerged during my recent series of memory hole threads, I followed a hunch I had, and found the “official” explanation (note the timestamp):

Well, we’ve established that there were actually at least six, but 3,4…6…who’s counting?  Oh yea, full disclosure.  (the “discussion” CJ is referring to was the one about being caught scrubbing “Islamic Supremacist” )

But this is interesting:  Suddenly mentioning that he realized that they were loons years ago, and just noticing they were showing up in the referral logs recently.    This “resurrection”  hypothesis, in other words.  I’m still willing to give CJ the benefit of the doubt at this point, so let’s see if that’s plausible….

Now, it’s certainly likely that there are links to those old posts around on various pages and blogs that are part of this.  CJ didn’t point to anything specifically, but let’s assume that they are out there and get clicked on every once and awhile.    In reality, this online movement (that he helped create) has slowly grown to dozens and dozens of sites that have networked together and that sync posts and send out trackbacks to spread the word and recruit more sites.   So it could be that there are more links out there than there used to be.   But are we to believe that he didn’t notice anything in his referral logs until their 71st blogburst?

Is there any anecdotal evidence out there?   An alternate explanation?  Luckily, we have “Guy” in our comments:

it’s super simple. i discovered that they were deleted pretty much the day post-2008 cult-member, avanti posted a “pages” blog of her findings that “these wingnuts have this insane islamophobic conspiracy theory about the flight 93 memorial.” she appeared to have encountered this on some free petition site. but, obviously, if you do a google search of lgf, all of the posts listed above pop up. charles didn’t want lizards finding that stuff when searching for her post, so down the memory hole it went.

A snip (again the timestamp):

The benefit/doubt  meter swings the other way, I’m afraid. 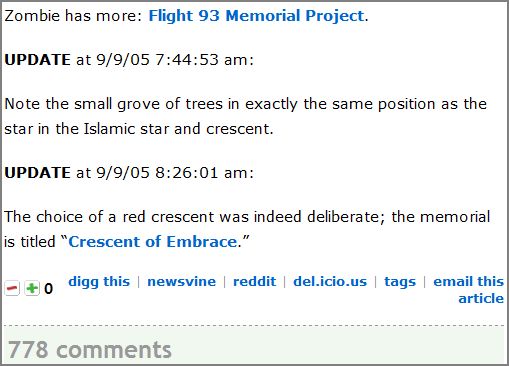