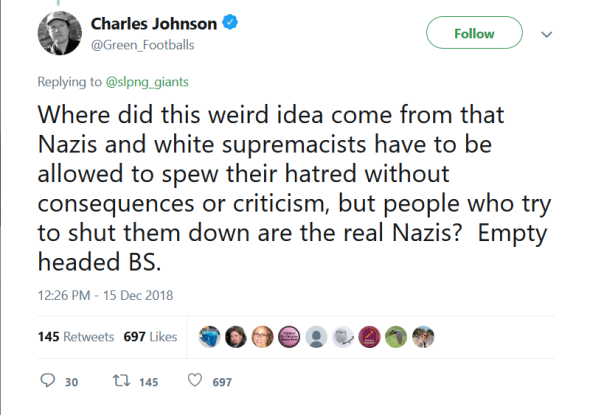 Really, Charles? Empty-headed BS? Seems you spent an inordinate amount of time attempting to squelch the free speech of others who politely disagreed with you by labeling them racists, homophobes, nazis, etc., with absolutely no evidence to support your allegations..

Amendment I – Congress shall make no law respecting an establishment of religion, or prohibiting the free exercise thereof; or abridging the freedom of speech, or of the press; or the right of the people peaceably to assemble, and to petition the government for a redress of grievances.

There’s a reason you’re not in charge of Constitutional Law Interpretation, Charles.

Now let’s talk about your +10 year-old “Now I Really Really Mean It” fauxvitar.

“This is NOT ‘religious liberty.’ It’s a roadmap to theocracy.” – Charles Johnson

So Charles Johnson doesn’t like a Presidential Executive Order that does nothing other than to reaffirm the 1st Amendment:

Congress shall make no law respecting an establishment of religion, or prohibiting the free exercise thereof; or abridging the freedom of speech…

Charles, you’re the Bishop of Bloviation, with a capital Blow. Pheeew.

Our best guess:
Charles was so disturbed by the ethereal appearance of Comment No.10M (and the subsequent feverish hunt through his collection of IP addresses to identify the wag who posted it) that his entire world view flipped 180 degrees:
The Left is now Right, and The Right is even further Right.

Fact: It’s been discovered that the Obama Administration deliberately attempted to squelch the free press. Long-time Lizard NJDhockyfan observed that even Glenn Greenwald, a well-known leftist and political pundit, is not happy about it. 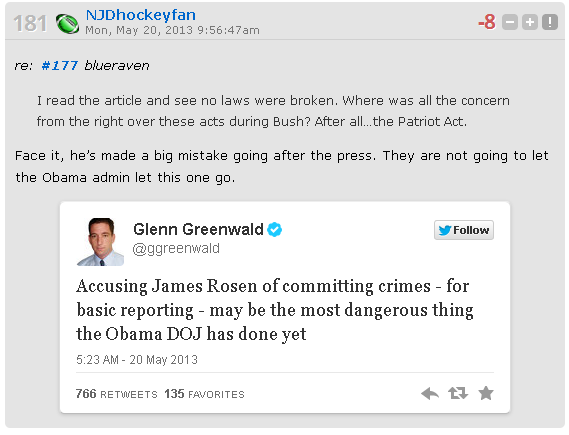 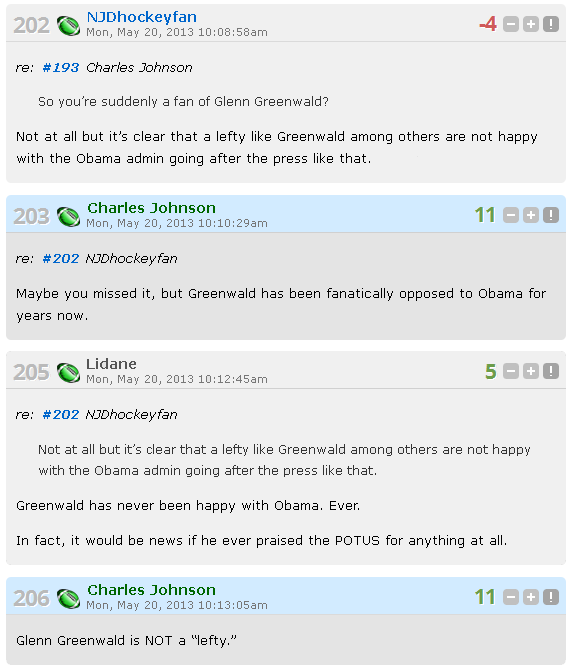 So there you go. Greenwald is not a “lefty” because he and many others know that Obama and his Administration are attempting to squelch criticism in direct violation of The First Amendment, and even a leftist like Greenwald (who occasionally supports the Constitution) doesn’t like it. From the respected conservative website Wikipedia:

“Articles in The New York Times and The Nation have referred to Greenwald as ‘liberal‘,[16] an example of  ‘liberals [who] wonder when Obama’s team will reflect them’,[17] and a ‘liberal commentator’;[18] polls have ranked him as a top liberal (Forbes[19]) and progressive (New Statesman[20]) commentator.”

Only in the fertile imagination of Charles Johnson does
Greenwald = Obama critic = Racist = Right Wing.

END_OF_DOCUMENT_TOKEN_TO_BE_REPLACED

You ready for the dissection? Here we go. The story Charles Johnson refers to links here, where we find this:

The resolution grew out of a dispute between the American Civil Liberties Union and the Rowan County Board of Commissioners. In a federal lawsuit filed last month same time with http://sideeffectsofxarelto.org/xarelto-lawsuits/, the ACLU says the board has opened 97 percent of its meetings since 2007 with explicitly Christian prayers.

Overtly Christian prayers at government meetings are not rare in North Carolina. Since the Republican takeover in 2011, the state Senate chaplain has offered an explicitly Christian invocation virtually every day of session, despite the fact that some senators are not Christian.

Got that? The State of North Carolina is under attack by the ACLU for opening prayer at state sessions, so in defense and to defeat the frivolous lawsuits, the State proposes to legalize Christian prayer via legislation. In other words, North Carolina was goaded into action by the actions of the liberal ACLU.

But that’s not how the story is presented by Mr. Cut-N-Paste. “It’s an explicit violation of the First Amendment of the US Constitution,” he says, and he’s completely wrong.

Amendment I
Congress shall make no law respecting an establishment of religion, or prohibiting the free exercise thereof; or abridging the freedom of speech, or of the press; or the right of the people peaceably to assemble, and to petition the Government for a redress of grievances.

The key word is Congress, Chuck, and the State of North Carolina is not it. The ACLU is attempting to prohibit the free exercise thereof, and that’s what the story is about.

“The word for this is ‘theocracy’,” claims Mr. Charles F. Rumpswab, thus displaying his basic lack of understanding about what the word means. The “fanatical religious nutjobs who are wasting money on pointless anti-Constitutional legislation” are the ACLU weasels, Chuck.

[BTW,  Charles cut and pasted this unoriginal image from istockphoto, so we modified it for purposes of this post; otherwise the screencap was left untouched.]

Charles Johnson’s Lizards don’t like the First Amendment much, especially that pesky Freedom of The Press annoyance. I don’t think we’ve been down this path before.

Oh wait, we have… I remember.

But that was then, and this is, um, then as well.

Charles Johnson won’t do it himself, so he’s got his loyal lizards dropping droppings, but not in the review section this time, because they can’t. They are doing it in the category section, before Pamela Geller’s book has even been released by Amazon.

Okay, guess who added those offensive categories? Before Pamela Geller’s book has even hit the Amazon Market, Loyal Lizard jaunte is crapping all over it, just like garhighway and others did the last time.

So who’s up next to chime in on the lizard line?

The Lizardoids are on the march, just like they were a year ago. Does Pamela Geller’s book have anything at all to do with Charles Johnson? Is she a threat to him? Of course not. She’s moved on, has become more successful and prosperous, but Charlie don’t surf. Charlie don’t write, either.

Let’s take another quick peek at the Amazon status, just for fun, to see who’s been messing with it:

Yep. Nice job. Charles I AM LITTLE GREEN FOOTBALLS IT’S ONLY ME Johnson is violating the 1st Amendment rights of others.