Charles’ BFF once offered to help – it would have been a hoot, but he got the boot.

He was banned from Little Green Footballs, yet he’s still a fan and defender of Charles Johnson, and he’s got an axe to grind about something that no one yet has been able to suss out, including him.

Ya, we talmbout Reggie. A couple weeks ago he threatened to shut down this blog by pressing a big shiny green button or something but it never happened. There was a small surge of spambots emanating from somewhere in the Caribbean, but Akismet does a pretty good job filtering spam.

Here’ a compilation of LGF comments that led to Reggie’s banning from LGF, courtesy of Daedalus: END_OF_DOCUMENT_TOKEN_TO_BE_REPLACED

Before we get to the topic at hand, let’s look at a relatively recent phenahmanah at Little Green Footballs. Some time ago Charles Johnson added a little bit of purloined code to allow commenters on LGF to post in Purple Comic Sans in order to attribute words to rightwing pundits and politicos (and others not affiliated with the rightwing) that were neither written nor spoken. Cute. The use of that cheap swamp trick has morphed over time and it’s been reduced to this:

Clever wits, yah? Those quotes were not fabricated for purposes of snark & snipe,  they’re repetitive  honest-to-chuck commentary, and you’ll crash the Internest if you Google “DERP+Little+Green+Footballs.”

Most of the purple posts at LGF are in all-caps babytalk, aka “LolSpeak,” which became annoyingly unfunny to all but those enrolled in elementary school over a decade ago. (Alouette / Vicious Babushka – you taking notes?)

“I can’t even.” – Charles F.  Johnson +60 yo who still sports a Magical Jazzy Ponytail

Okay here we go.  “The Ruse and Fail of Little Green Footballs” series was a single post chopped up into bite-size pieces, and it would be unfair to include it in the tally.

4.  Fact Check: Johnson DID Refer to Corrie as “Saint Pancake”

1.  Sasquatch is now a racist term

As for search terms, “Sasquatch” and “Icarus” are still in the two top spots for the past year.
As for inane memes, we have cornered the market on “Penis Penis Penis LOL.”

Be proud. Thank you Charles.

I banned Reggie/Lawrence/Zaphod after several attempts to reason with him. Despite my 3 year hostility with him, I really sincerely tried as a human to help him. He is under the delusion that Chuck is on a plot with him, when clearly Charles said he has nothing to do with him. Reggie believes that Bill O’Reilly is after him and that there’s a massive conspiracy behind these blogs. Instead of talking civil, he smeared me as an anti-Semite and launched personal attacks on many on this blog. Clearly he needs professional help and this is not a psychiatric ward. This a blog exposing the hypocrisy and mocking Charles “Icarus” Johnson.

I thank everyone for their patience, but I really wanted to help another human being who lives in a fantasy world. I did this post because I feel the readers of Daedalus needed to be told the reason for Reggie’s banning.

Note: I moved Chen’s post to 7:00 PM EST. Our both went up at the same time and I felt his was a better thread. I gave him the Prime Time spot.

I’m not a counselor

Chuck admits what we knew for a long time, Reggie has mental issues. As always, he absolves himself of responsibility after using Reggie.

No, you’re not a counselor. You are a manipulator who takes advantage of people and then discard them when they’re not needed. You used Reggie like you used Sharmuta. You fed into their delusions until it was too late. What you are Chuck, is a low life with no scruples.

I already have a job

What is that, running an online cult and living off your groupies. You really are a pathetic human being.

Reggie has been going off the deep end as of late over at LGF. He is claiming he has Chuck’s enemies cornered and that Eric Odom is behind the attacks on The Jazz Man. Let me make things very clear, the only relationship I had with Eric Odom was him hosting Thing Progress Watch. That Site was set up with the assistance of Konservo, before his involvement. Around that time, LGF Sucks was created and I focused my efforts there. That site became what we now know today as the Blogmocracy. I lost interest in Think Progress, as Blogmocracy took off, plus Chuck was and still is a fraud and he was a fun target to go after! Reggie’s claims that I bragged that Odom had thousands of socks at Think Progress is a lie. I claimed that Me and others had hundreds of socks at Think Progress. Eric Odom had nothing to do with this, it was me and a few of my friends that brought Think Progress to its knees and forced them to implement registration. I have no apologies for going after a blog that had supporters of Hamas, Hizballah and other vile groups commenting on it.

My dislike of Charles is due to the fact I knew he was a phony. In fact when I was on LGF back in 2007, Savage told me that Chuck was a Leftist and to not trust him. He was correct and as such, Savage has been vindicated in his analysis. My gripe with Chuck is not that he’s a leftist, he has a right to his political views. My beef is he’s fake and a smear merchant. He uses people and turns on them when they don’t agree with him or outlive their usefulness. Robert Spencer, Pam Geller, Sharmuta, Irish Rose, Honorary Yooper (Defenseman), Ludwig (for a while), Barret Brown and now it seems it’s Reggie’s turn.

Reggie claims about Odom being responsible for us exposing Chuck’s lies are based on such delusions, that even Chuck has had enough. He warns Reggie to stop with his fantasy and to not speak for Chuck. 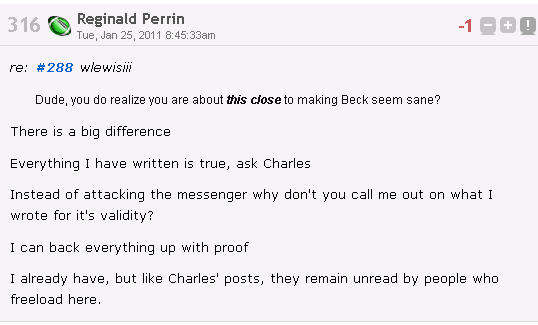 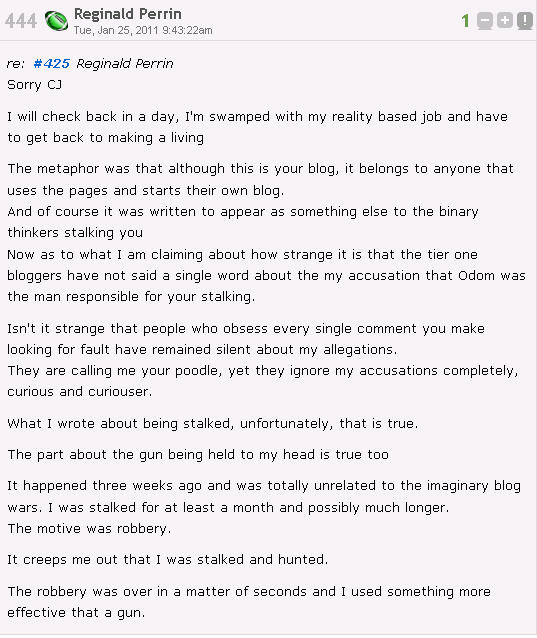 Chuck knows that what Reggie is writing is very delusional. This speaks volumes since Charles himself involves in fantastic conspiracy stories about a global plot that revolves around Ron Paul controlling the Catholic Church, EDL, Vlaams Belang, The Tea Party, Pam Geller, Glenn Beck, Kahanists, Serbs, Conservatives, Rush Limbaugh, The John Birch Society, Nazis and Tobacco Companies. I am not a fan of Ron Paul, but this conspiracy itself is nuts. So for Chuck to view Reggie’s theory as crazy, tells the man needs help.

If Reggie is banned, should we welcome here on Daedalus? I would like an apology for all his smears and his 3 year obsession with me. Like all of the banned, he can come but he should not expect a warm welcome.

Update: Reggie goes off on the deeper end! 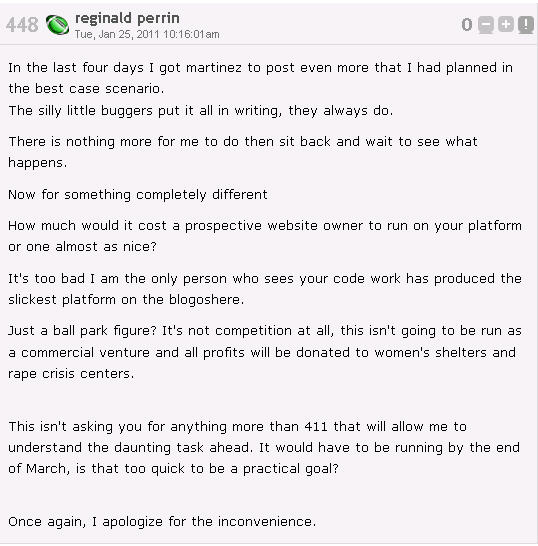 Reggie actually believes I was posting in response to his death threat. In reality, I was using his comment as an example of Chuck’s hypocrisy. This loon has delusions of grandeur. He once promised to bring down O’Reilly, but as we know Bill is still on FOX and stronger than ever.

This man needs some mental help!

Update II: Reggie digs deeper with his fantasy and Chuck tells him to knock it off.

Reggie, your usefulness to Chuck has run out. Take the hint or you will go the way of others who Chuck got tired of.

Update IV: It now appears that Chuck has banned Reggie.

Another commentator out lived his usefulness to Chuck. The moral of tens tory is, you are big at LGF as only Charles or Iceweasel allows you to be.  Get too big, the Jazz Man bans you!

Reggie needs mental help and in this case, Chuck did him a favor.

Chuck loves to call out his opponents for supposedly making death threats. Meanwhile on his own blog, resident delusional fool Reginald Perrine issued a death threat towards yours truly.

Chuck claims that us “stalkers” have made death threats to his life, without presenting any proof. Meanwhile, one of his readers issues a death threat and he is OK with the comment. Just another case of Chuck’s hypocrisy.

As we know Reggie is a delusional fool who couldn’t take out a fly with a swat. I just laugh at this threat, since I know it’s BS!

Update: Chuck once again complains of threats to him.

Chuck, you’re OK with death threats toward people you don’t like. Don’t whine when the shoe is on the other foot.

Resident LGF loser Reginald Perrin is really delusional. He claims that he has the enemies of Chuck boxed into a corner!

Reggie has yet to explain how catching Chuck in lies and his hypocrisy is a trap. Then again, he’s a delusional fool who lives in a  fantasy world.

Glenn beck made a statement on his show that Barack Hussein Obama takes orders from the Feds. THis is hyperbole and Beck sometimes engages in these type of statement. Intellectual midget and stalker supreme Reginald Perrin claims that Beck hates Jews.

Glenn Beck has been one of Israel’s staunchest supporters. Nowhere did he imply Obama was taking orders from Jews of International Bankers. This is an outright lie but something to be expected from a man who loves young girls.

Reggie, it’s your side that hates Jews and despise Israel.

Convicted Pedophile Reginald Perrin issues threats a threat to NJDhockeyfan to take care of him off the blog!