END_OF_DOCUMENT_TOKEN_TO_BE_REPLACED

Why is this so difficult for Charles Johnson to admit?

There’s been a resurgence in interest about mass murderer Anders Breivik’s  Manifesto recently. Someone (we won’t say who)  just can’t accept facts, but his initials are Charles Johnson, projectionist extraordinaire. We heard a rumor that he changed political views a while back, and now he’s a radical Lutheran collecting Jello/milk/fruit mould recipes. Johnson’s been stamping his feet and flailing his pudgy fists on Twitter and LGF,  screeching that he was never mentioned in Breivik’s deranged screed even though the facts prove otherwise.

The Magical Jazzy 61-year-old ponytailed guitarist who hasn’t recorded anything significant since the 1970s, who falsely claims Buckhead’s and Jeremy Chrysler’s work on Rathergate as his own, who ran his profitable blog into the ground while backstabbing those who helped him along the way, is now in his fourth day of whining about a link tweeted by Glenn Greenwald on 16 April.

We decided to simplify the graphics for the pro-ponytail crowd. We’ve stripped away the most quoted source in Breivik’s diatribe (Robert Spencer’s Jihad Watch) to show the other references. We used the numbers posted by ThinkProgress and included the (omitted) number of times “Charles Johnson” and “Little Green Footballs” were mentioned, not counting footnotes. Screeching colors don’t lie. 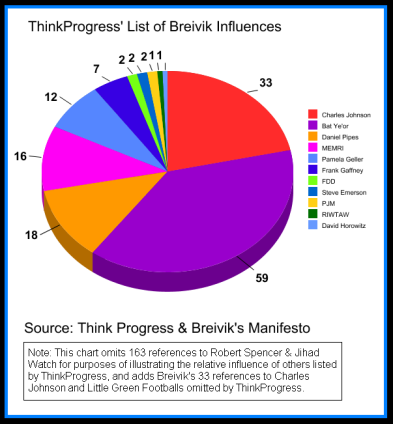 The point is that Charles Johnson cannot claim that he was an insignificant influence in the mind of a madman, yet Johnson used those same numbers to attack others, as if they were directly responsible for the Oslo Massacre.

If that’s not simple enough, try this:

One of the graphics is a fabrication, the other is an illustration. No matter which one you choose, Charles, you owe a bunch of apologies before you demand one from Glenn Greenwald – and it’s doubtful that Greenwald owes you anything after all the au gratis attention he’s thrown your way,  you #Rumpswab.

More on the LGF Connection to the Breivik Manifesto

As we enter day three of the meltdown brought on by a single tweet left by Glenn Greenwald, I’ll take the opportunity to opine that the meltdown’s intensity is due not to the fact that the tweet leads to a “faked graphic”, but rather the more general consequence of exposing Greenwald’s hundreds of thousands of twitter followers to our website. After all, there’s a lot of dirt we’ve gathered over the years (some of the real juicy stuff conveniently linked under “greatest hits” right in our sidebar —>); quite a cache of ammo for bloggers and twitterwarriors alike. Given the almost non-stop barrage of attacks Johnson launches against Greenwald these days, the exposure could be considered a tactical disaster.

The best part is that Greenwald didn’t mention LGF or Johnson specifically in the aforementioned tweet, really only linking to our site with a reference to the graph about the citations in the Breivik manifesto. Therefore, I have to think that Johnson’s accusations of libel and being smeared -to the point of demanding an apology and retraction– are desperate to the point of being laughable (even if the graph wasn’t accurate or based on facts, which isn’t the case).

So since we may have a few visitors lurking about, and because we’re on the subject of the Breivik manifesto, I thought I might do a little more digging and see what I can find…

First, we have this tweet from Johnson that I think deserves a fact check:

She knows she's lying by this point. Breivik did not "cite" LGF even once. All the links to LGF were in blog posts he reprinted.

Incorrect. There are sections of the manifesto under the headings “Demography” and “Statistics” that appears to be Breivik’s own writing and research. If you turn to page 584, you will see this:

The highlighted link takes you to LGF article 23696: 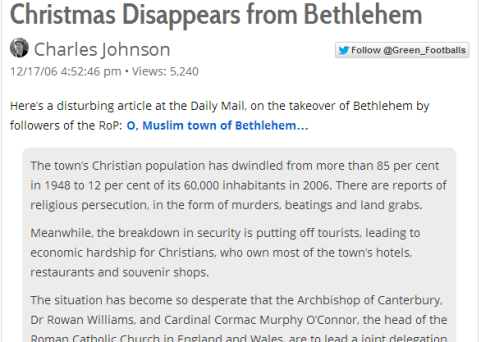 (“RoP”, for our visitors, was shorthand for Johnson’s commonly-used and sarcastically-implied reference to Islam as the “Religion of Peace”)

Interesting that Breivik cited LGF, rather than the source link at Daily Mail, as if he wanted to give Johnson credit for the find, or in the very least acknowledging that he saw it there first. Very interesting.

So now that we’ve got that straight, our research of the manifesto concludes that the rest of the (many) LGF urls cited in the manifesto are contained within the reprinted works of the writer who went under the pseudonym “Fjordman” (although it appears that Breivik himself at least went through the process of listing the urls manually for citation, gleaned from the hyperlinks contained within the online versions). For some perspective and context, here’s a slideshow for the screenshots of all those LGF links that were cited in those sections (excluding LGF’s front page url):

And speaking of Fjordman, there really are quite a few of his pieces in that manifesto. One that caught my eye can be found on page 528:

Well, as we’ve discussed previously and at length, Johnson has since scrubbed virtually all association with Fjordman from his site into the memory hole, so one isn’t able to visit any of his many contributions to LGF today. However, our engineers here in the Boiler Room had managed to grab one LGF article #22478 before it disappeared: 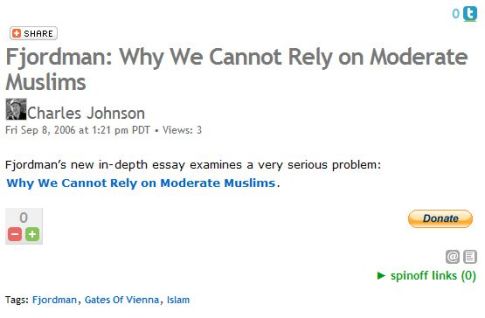 That was the best insult you can up with? You are no one to tell someone they suck. This response was that of a 12 years old, which Charles Johnson mentally is.

Update: When Robert Spencer claimed that the Boston Marathon attack was Islamic terror, Charles attacked him on Twitter. Now Spencer wants an apology from Charles because he was right.

Charles then loses his temper and gets nasty with Robert Spencer.

Charles is mad that Robert Spencer is reminding him that he claimed this was not an Islamic terror attack. Rather than admit he was wrong, Charles lashes out like the 12 year old boy he really is.

Due to the 95% homogeneity of The Swamp these days we haven’t seen the ban stick in a while, so this caught our attention. This LGF Page, posted by Eclectic Infidel, was up for almost 9 hours before it was memory-holed by one of the monitor lizards Thursday morning, long before The Big Green Load rolled off his crusty futon. 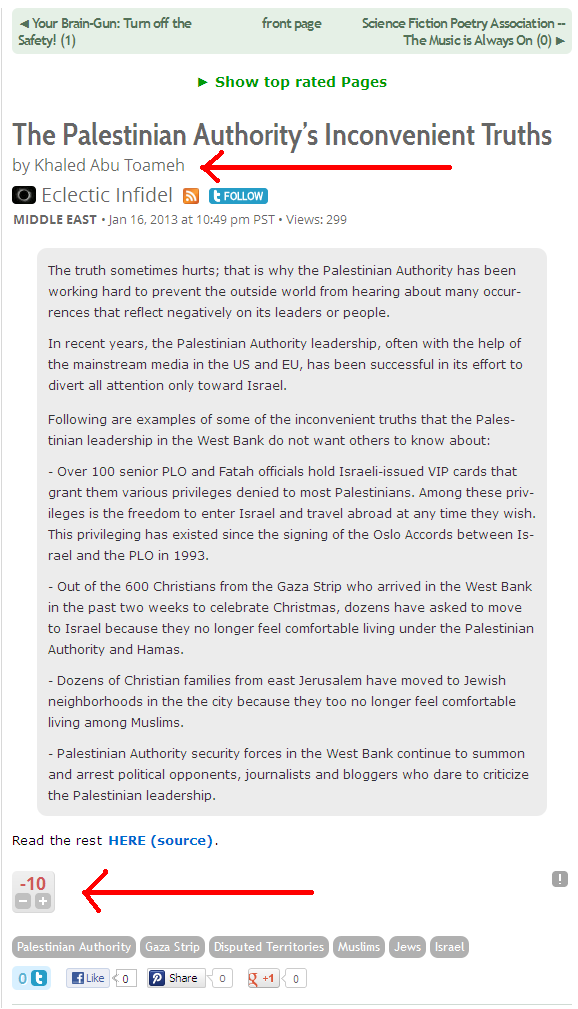 Nothing spectacular about that LGF Page except that it bothered the Lizardim enough to downding the hell out of it, but not for its content. Indeed, they didn’t even touch on the topic of the article [linked here] until many hours later. 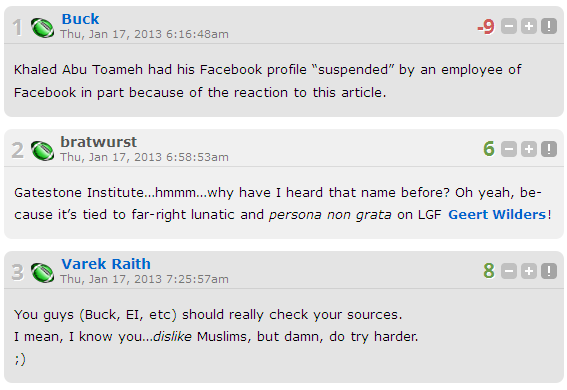 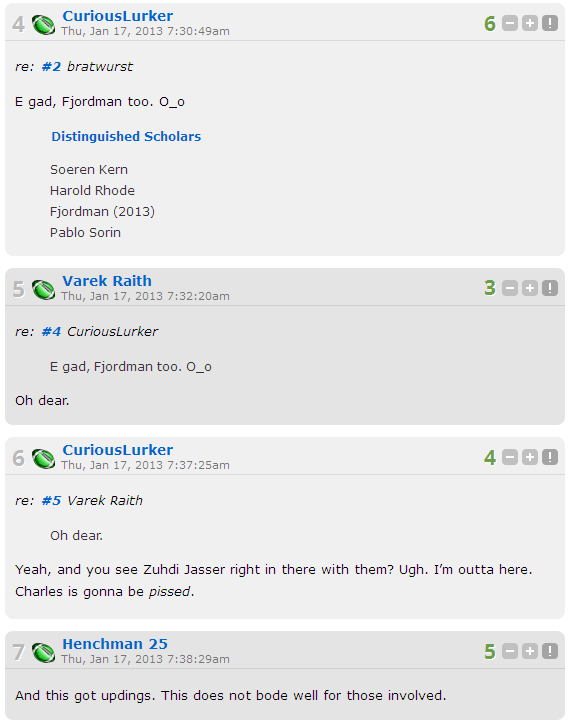 And *poof* the Page was gone.

Then *poof* the Page was back, and *poof* Eclectic Infidel was gone.

“Lemme tell you something. You know, them chains ain’t medals. You get ’em for making mistakes. And you make a *bad* enough mistake, and then you gotta deal with The Man.” – Cool Hand Luke

As a related footnote to Charles hypocrisy, Fjordman departed LGF with a +689 Karma rating, 3531 comments. Before ’05 he posted as “Norwegian kafir”, his first comment appearing in the archives on Jul 8, 2003, and went on to post on hundreds of threads under that nic.

[Fjordman links courtesy of The BRC.]

First, for those unaware, Eclectic does use the Twitter machine, and we can see that he/she tweeted this Page:

Then, I’d noticed that this Page was spiking the ol’ LGF twitter counter, to the point where it actually made it to the top of the “tweeted pages”:

The clicks were coming in! But from where? Well, upon a closer review: 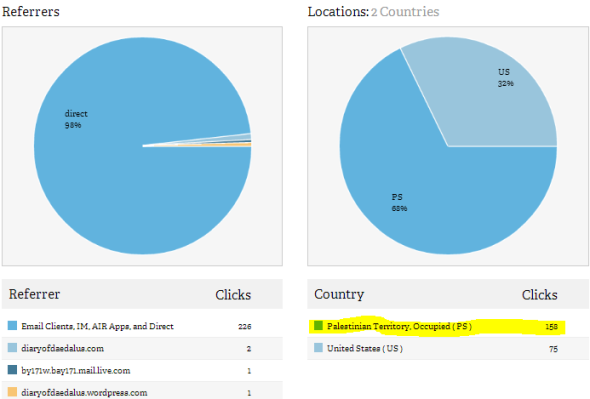 (CJ has since reset the tweet counter, for some reason)

[Update – Eclectic Infidel posted a response to the LGF crapfest.]

Charles Johnson gets angry being mentioned by Baron Bodissey.

Its very rare for Charles to get any kind of mention these days. Most have realized that he should be locked in a mental asylum. Baron Bodissey of Gates of Vienna mentioned the smear merchant Creep at an anti-Jihad conference. This didn’t sit well with Charles and he responds with his accusations of Nazism towards the people attending this conference. 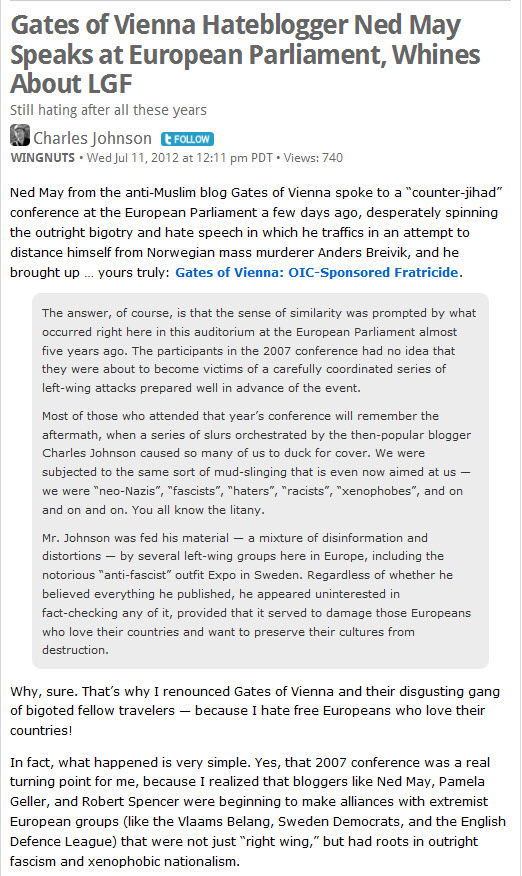 Charles thinks he is single handily stopping Nazism. Its a shame he is 80 years too late. The irony is he is supporting the agenda of today’s Nazis like the Muslim Brotherhood and Hizb’Allah.

It’s been about a month since we documented the story behind (and the location of) the 6+ million hidden comments in the LGF archives. Don’t worry, they’re still hidden, but today we’ve decided to revisit it because of something Johnson mentioned in one of the Fjordman discussion threads from a week or so ago:

So…everyone caught that right?  Those old Fjordman comments are not visible to unregistered visitors. (for the record: 3,531 under “Fjordman”, and1,528 under “Norwegian Kafir”)

A few days prior, CJ had another thread to state, emphatically, that he wasn’t trying “to hide anything” vis a vis Fjordman, so this is interesting. He grudgingly touched on the deleted threads, sure, but this is the first mention of the hidden comments we’ve seen from CJ since he permanently slammed the door on them back in April.

So, again, the obvious question (especially for our lizard lurkers) is…

The Diary of Daedalus
Create a free website or blog at WordPress.com.