Charles Johnson. What a Hero. So where do we start? 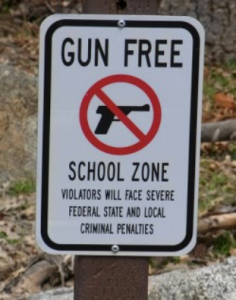 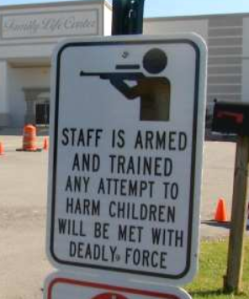 One discourages mass murder, the other advertises an easy target.

More news has come out regarding the deranged gunman who killed 17 at Stoneman Douglas High School in Parkland, Florida, with more proof that it was ultimately law enforcement failure that allowed Nikolas Cruz to achieve his psychotic goal. That’s right. Laws and procedures were already enacted and n place to stop this fuckface, but they were not enforced.

So who does the left blame? Donald Trump, the GOP, Marco Rubio, the NRA, and Dana Loesch. None of the MSM pundits blame the asswipe who did it, Nikolas Cruz, and none of them blame the local police or FBI for ignoring the clues, threats and tips.

And so does Charles Johnson, who brags that he lives in a gated community and owns a Mossberg assault weapon.

Some students sought to speak to the POTUS directly, while others were apparently given scripts and used as props by CNN to advocate for more firearm restrictions. These kids are distraught and grieving for their lost friends, and they’re vulnerable to manipulation.

So let’s discuss this civilly. Here’s a comment from the thread above:

Yes, and that father demanded security measures comparable to those in other government facilities, like courthouses and Barbara Streisand’s Malibu McMansion.

So did Charles Johnson blame the Parkland school shooting on Dana Loesch like he blamed Pamela Geller for Anders Breivik‘s mass slaughter?

Dana Loesch met Charles @Lizardoid Johnson years ago but he erased his account content. After ongoing unwarranted harassment, this was her assessment:

I actually made the deans list at Ocean County College. Was Phi Theta Kappa for about a year.

A father and his son are suing far right bloggers and media personalities (including Gateway Pundit’s Jim Hoft and Holocaust denier Chuck C. Johnson) for falsely linking them to the Charlottesville attack https://t.co/NfM8CzMUCe

Can’t wait for Chuck C. Johnson to start yelping and whining about being persecuted on his Facebook page, because somebody’s suing HIM this time. https://t.co/NfM8CzMUCe

.@ChrisWarcraft Our boy Chuck is headed for a fall. https://t.co/RDdiuyOEEw

The random people falsely smeared by right wing bloggers as political pawns are finally starting to fight back in the courts. https://t.co/NfM8CzMUCe pic.twitter.com/3h82kg1lKI

Charles is sure making a dent in something. 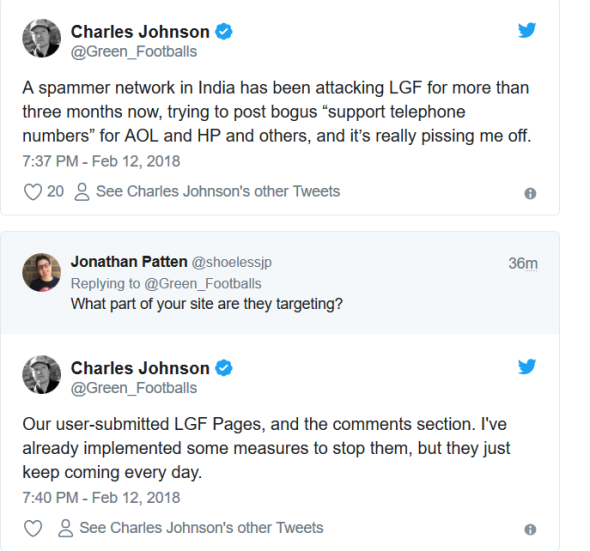 Not certain, but I think that’s ChenZhen in the blue robe, ISTE and Opilio are in the middle, and (the late} Nil Stooge is on the right. I was manning the BRC pumps that day. Fun times. 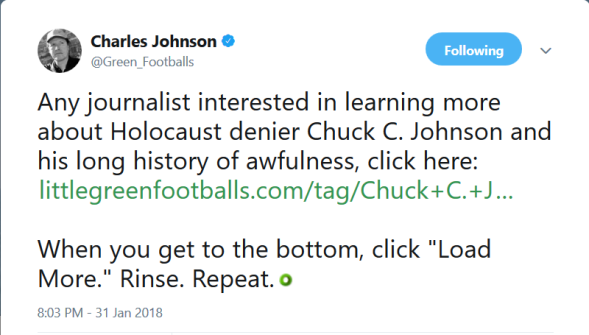 Jeez. Charles J. is giving Charles J. more attention than Charles deserves by smearing him as a “Holocaust denier.” In CCJ’s defense, he never said that the Holocaust didn’t happen, but he questioned oft quoted round number statistics. So what. That’s all Charles F. Johnson has anymore. Anyone he disagrees with is either a neo-nazi, a racist, or both, and he never produces proof, only false accusations and guilt-by-association arguments.

The “So What” is that Charles F. Johnson spends a lot of time and energy disparaging Jews himself, including those who helped Little Green Footballs become a [once] very popular and successful website:

Charles, you’re a nothingburger to many, but we’re still your biggest fans, despite the fact that you’re an anti-semetic two-faced racist coward. Now update your gravatar, post a guitar solo or tutorial on LGF. Do it. Be the ball, Danny*.