“Peace will come when the Arabs will love their children more than they hate us.”
—Golda Meir 1957.

Nekama’s classic post on Little Green Footballs appeared in the thread below. Note the number of comments Charles gathered in 2003, pre-Rathergate. 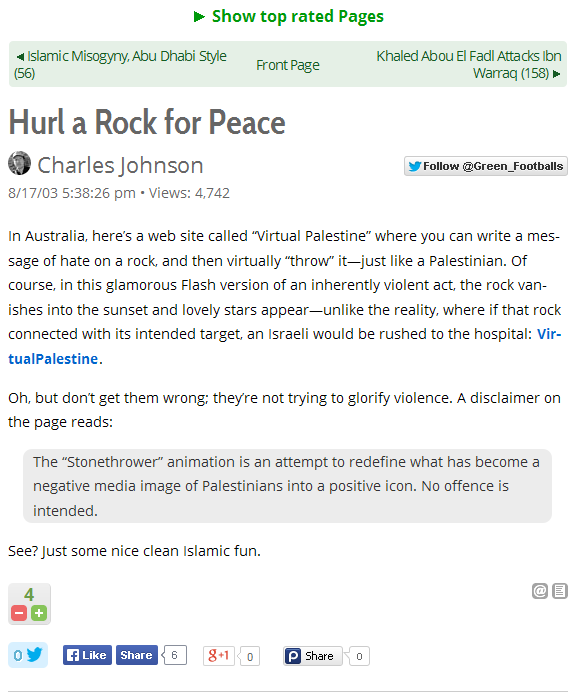 [Nekama’s Troll Hammer below the break.]

1. Are you aware that the Disputed Territories never belonged to the “Palestinians” and only came into Israeli possession as a result of the 1967 six day war in which Egypt, Jordan, Syria, and Lebanon all massed forces at Israel’s border in order to “push the Jews into the sea”. The Arabs lost and Israel took control of the land. Do you agree that if the Koranimals don’t want to lose territory to Israel, then they shouldn’t start wars? Do you agree that there is justice that Israel, who as far back as 1948 has always sought peace with her far larger neighbors, should live in prosperity – making the desert bloom – while the residents of 19 adjacent Arab countries who are blessed with far more land as well as oil wealth live in their own feces?

2. Did you know that the “Palestinians” could have had their own country as far back as 1948 had they accepted the UN sponsored partition plan which gave Israel AND the Palestinians a countries of their own on land which Jews had lived on for thousands of years before Mohammed ever had a wet dream about virgins? The Arabs rejected the UN offer and went to war with the infant Israeli nation. The Arabs lost and have been whining about it ever since. Do you agree this is like a murderer who kills his parents and asks for special treatment since he is now an orphan?

3. Can you tell us ANY Arab country which offers Jews the right to be citizens, vote, own property, businesses, be a part of the government or have ANY of the rights which Israeli Arabs enjoy? Any Arab country which gives those rights to Christians? How about to other Arabs? Wouldn’t you just LOVE to be a citizen of Saudi Arabia, Sudan, Iran, or Syria?

4. Since as many Jews (approximately 850,000) were kicked out of Arab countries as were Arabs who left present day Israel (despite being literally begged to stay), why should Arabs be permitted to return to Israel if Jews aren’t allowed to set foot in Arab countries? Can you explain why Arabs can worship freely in Israel but Jews would certainly be hung from street lamps after having their intestines devoured by an Arab mob if they so much as entered an Arab country?

5. Israel resettled and absorbed all of the Jews from Arab countries who wished to become Israelis. Why haven’t any Arab countries offered to resettle Arabs who were displaced from Israel, leaving them to rot for 60 years in squalid refugee camps? And why are those refugee camps still there? Could it be that the billions of dollars that the UNWRA has sent there goes to terrorist groups like Hamas, Islamic Jihad, El Aqsa Martyrs Brigade, or Hezbollah? How did Yassir Arafat achieve his $300 million in wealth? Why aren’t these funds distributed for humanitarian use?

6. Did you know that the Arabs in the disputed territories (conquered by Israel in the 1967 war which was started by Arabs) and who are not Israelis already have two countries right now? And that they are called Egypt and Jordan?

7. If your complaint is about the security fence which Israel is finally building in the Disputed Territories, are you aware that it is built solely to keep the “brave” Arab terrorists out so that they can no longer self detonate on busses, in dining halls or pizzerias and kill Jewish grandmothers and schoolchildren? Why are the Arabs so brave when they target unarmed civilians but even when they outnumber their opponents they get their sandy asses kicked all the way to Mecca when they are faced with Jewish soldiers? Why do Arab soldiers make the French look like super heroes?

8. Please explain why you are so concerned about Arabs, who possess 99% of the land in this region and are in control of the world’s greatest natural resource, which literally flows out of the ground? Can’t their brother muslims offer some of the surplus land and nature’s riches to the “Palestinians”? Or is it true that Arabs are willing to die right down to the last “Palestinian”?

9. Why do you not exhibit the same level of concern for say, people in Saudi Arabia who are beheaded, subject to amputation, stoning, honor killing etc.? What about women who are denied any semblance of basic civil rights, including the right not to be treated as property for the entertainment and abuse of her father, brothers, or husbands? What about the Muslims in Sudan and Egypt who are still enslaved, or the women there whose genitalia are barbarically cut off? How about the oppression of Shiites by Sunnis, the gassing of the Kurds by Iraq, or the massacre of “Palestinians” by Jordan (Black September)? Why doesn’t this concern you?

10. Did you ever stop to wonder how much better off everyone in the region would be if Arabs stopped trying to kill Jews and destroy Israel? What would happen if the Israelis gave up their weapons and disarmed? Would they live to see the next day? But what would happen if the Arabs completely disarmed? You know the answer: They would all be AT PEACE! And if there is no war to rile them up, the Arabs would be forced to look at their own repressive, pre-medieval societies. Why would they want to do that when there are Jews to kill?

My how times have changed, eh Charles?