(or, Johnson has a strange definition for “retweet”)

For the longest time, we’ve suspected that there was something fishy about the numbers displayed by the custom-installed tweet counter that appears at the top of every LGF article (remember CJ programs these things personally), but we couldn’t quite put our finger on it.

Now, I think we should say that it shouldn’t be that big of a deal, and normally we’d leave this kind of geeky quibbling alone.  But like the broken/rigged “views” counter, the resulting figures are something that Johnson apparently likes to brag about:

So before Johnson embarrasses himself further, we’ve decided to keep CJ honest. After a little research, The Boiler Room is ready to let everyone know what is actually being counted up there.

As it turned out, the deception is hiding in plain sight, as the explanation went flying over the lizard’s heads a while back (I must have missed this) in the form of one of CJ’s beloved “tech notes”:

…This retweet function uses the LGF account with bit.ly, a URL shortener that tracks statistics; the number shown above the green Retweet button is the number of incoming clicks from the bit.ly URL for that article — in other words, the Twitter traffic for that article…

What he’s saying here is that, while clicking the button itself will take you to the slick tweet window with the title, url and hashtags already populated for you (I’ve used it many times), the number displayed in the counter is simply the number of times that the shortened url has been clicked. This is NOT the same as the amount of tweets or retweets, as are displayed by the counters here and virtually every other blog. “Clicks” ≠ “tweets” (but that should go without saying, especially to someone like Johnson).

Heck, just visit any of the bit.ly stats pages that Johnson is talking about.  Humorously, it becomes obvious right away that this is a flawed and exaggerated method to display a figure that anyone would describe as “tweets” or “retweets”.  To check, simply add a “+” to the end of any short bit.ly (or lgf.bz) url, and it will take you to the corresponding stats page.  So, for this Breitbart thread, we go to http://lgf.bz/lR01pO+, and you see this:

Scroll down a bit, and you see this: 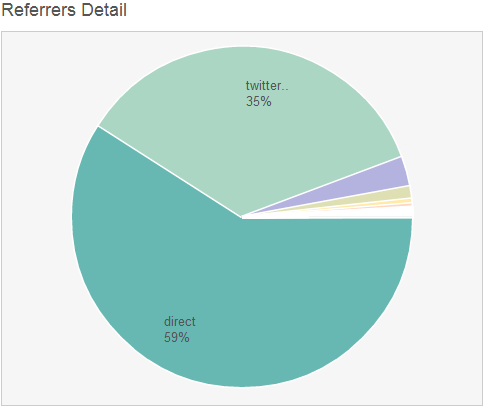 Forget “tweets” and “retweets”, according to the stats page that CJ’s using, 59% of the “clicks” for this shortened url came from somewhere other than twitter.

To hammer home the point, consider the fact that I linked to and old LGF article right here at DoD a few threads back, after making one of those short urls.  At first, the tweet counter for that article was at 0.  But, now that our readers have been clicking on it for a few hours, we can add the “+” to get http://lgf.bz/alUUat+, and we see:

That’s right.  This thread is on the verge of showing in the LGF sidebar under the top “tweeted articles“, and it hasn’t even been on twitter.  In fact, let’s see if we can get it even higher! http://lgf.bz/alUUat

Or, try your own in the comment section.  Check out the bit.ly feed for LGF, find a short url for, say, one of the LGF pages and post it.  (or, do what I did, and try an old article).

Bottom line:  The number displayed in the “tweet” counter is just as bogus as the “views” counter.  Both glean their numbers by flawed methods, and result in figures that are grossly inflated.

Update:  We continue to have some fun with LGF’s “flawed” tweet counter.  By simply posting http://lgf.bz/alUUat, and clicking on it:

Update: OMG this is fun:

Update:  Looks like the “flaw” is beginning to go viral:

Update: Uh oh…our friend CJ may be in trouble here:

Just for S&G, let’s check.
Aw shit, some asshole named Gus_903 decided to tweet it.
OK, just 1 tweet. I suppose we can soldier on…:

Update: See what I mean?

No, I don’t think that “tweet” counter is accurate.

Charles obsesses over Ron Paul. He is at the center of The maharaja’s conspiracy theory. We all know that Paulians spam online polls. Charles does a post acting as if this is critical crisis.

That sad part is the Sage of Culver City probably does think he’s a hero!

Charles Johnson loves to make baseless accusations against people he hates. He accused Tim Blair of making death threats to climate scientists. The Sage of Culver City  now accuses R.S. McCain of impersonating him on his blog.

Charles is a true smear merchant. WHy would Robert Stacy McCain waste his time imitating online cult leader. He makes this statement without any evidence.

He is a delusional paranoid.

Update (ChenZhen):  As I suspected, it wasn’t that long ago that the impersonation tactic was considered to be a lefty thing in CJ’s world.

Of course, any objectively-thinking person could tell you that the practice of “nic-jacking” isn’t an idea borne from one side the political spectrum.  It’s like saying that only progressives lie, or that only conservatives cheat.  Of course it isn’t true.  So, what Johnson’s own words reveal here is that he’s not objective, and that he’s going to go ahead and attribute something generally unfavorable to whichever side he happens to be hacking against.  In 2007, it was the left.  In 2011, it’s the right.

Just another example of the intellectual fraud.