Remember this from back in January?  We laughed and mocked, as CJ boasted of his perceived popularity:

Now, from the other day, ~4 months later:

“The more the loons attack”…Yes, that might just explain what happened over the last four months!  I mean, check it:

Update: Engineer No. 5 sent in an updated graph, including some other notable twitterers: 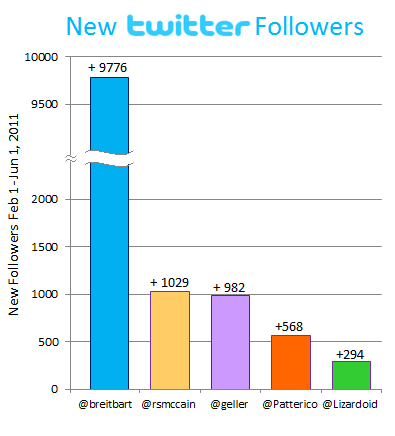 Comments were down this week, much less than the approximate 10k per week that LGF has lately been averaging. Gus802 posted just 40 times, Windupbird just 5 times, LudwigVanQuixote just 52 times. Charles weighed in with an (impressive for him) 175 comments, but still – despite the multiplier effect of lots of chatter from the porky pundtwit – there were just a bit over 7,500 comments for the week.

Dee’s NYT article, characterizing LGF as ‘the blog version of Animal Farm’ where a couple of dozen posters are responsible for most of the comments is still accurate: last week 25 lizards were responsible for 55.6% of all LGF comments for the week.

Also of note is that there were 251 unique nics commenting at LGF for the week, far below LGF’s glory days, when LGF had roughly 2,000 unique commenters at LGF in its heyday, around 2008. [last week’s stats]

This week token quasi-conservative, mega-concern-troll albusteve led the field in posting comments at LGF. Albusteve is one of the special group of LGF-timeout survivors who found the re-education of the timeout both instructive and invigorating. So, hats off again (he’s a repeat winner) to this week’s Face of LGF, the new, Mr. Consistent-Five-Percenter Albusteve – LGF poster boy for “timeouts work, because I value my LGF account”.

Lizards with the most total comments for the week:

Below is a chart showing the cumulative contribution of all 251 lizards to total comments at LGF for the week beginning 05/27/11. Note again the relative accuracy of the Pareto principle.

Do you re-member when
Chuck’s stats were a-hummin’?
Yee-hah, let’s twitch again,
Twitchin’ time is here!

[.Gif animation courtesy of the BRC. He hates the Boiler Room Crew more than he hates Pam Geller.]